In 2011, there has been an increase in the number of IT threats, in the first three months of the year, there was a daily average of 73,190 new samples of malware, the majority were Trojans, according to a new report from PanadaLabs.

Hackers have created 26 percent more new threats in the first months of 2011 than in the corresponding period of the previous year, and 16 percent over Q4. 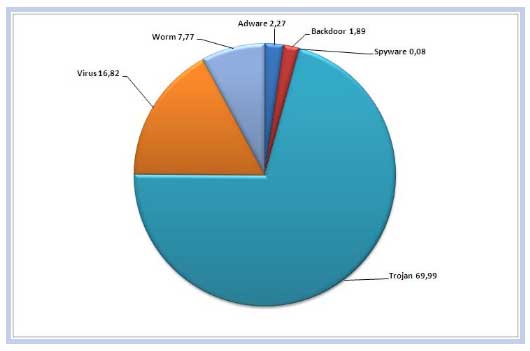 Trojans accounted for most of the new threats, comprising 70 percent of all new malware created.  These types of threats are favored by organized criminals for stealing bank details so they can perpetrate fraud or steal directly from victims’ accounts.

Top security threats in the first quarter include:

*At the beginning of March, PandaLabs witnessed the largest attack on Android to date.  This attack was launched from malicious applications on Android Market. In just four days these applications, which installed a Trojan, racked up over 50,000 downloads.  The Trojan steals personal information from cell phones,  and downloads and installs other apps without the user’s knowledge.  Google managed to rid its store of all malicious apps, and several days later removed them from users’ phones.

*George S. Bronk, a 23-year-old from California, pleaded guilty to hacking email accounts and blackmail, and now faces up to six years in prison.  Using information available on Facebook, he gained access to users’ email accounts.  After hijacking an account, he searched for personal information he could then use to blackmail the victim.  This quarter, even Mark Zuckerberg, had his Facebook fan page hacked.