People who adhere to the philosophy of "more is better" when it comes to photographs are almost sure to appreciate a change Facebook’s announced.  This afternoon, the company altered the way it displays photo albums so that many, many pictures can be seen on a single page.

This is perhaps not the most original idea in the world, considering that both Bing and Google have adopted similar approaches to displaying image search results.  There’s also a downside in that it may become easy for people to get lost in a sea of photos, unable to find one or two good ones they noticed earlier.

Still, as you can probably tell from the screenshot below, the concept is in most ways an upgrade compared to the previous setup. 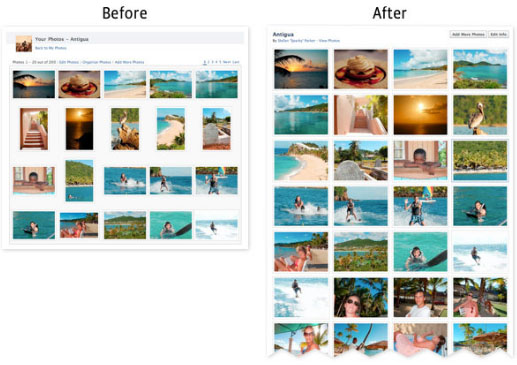 A post on the Facebook Blog explained to the uninitiated, "[A] photo album will automatically display additional photos as you scroll down a single page.  You no longer need to click ‘Next’ or try to guess which page number will reveal the best photos."

The post then continued, "The thumbnails displayed are also larger, so now you can see more before deciding whether to click to a full-sized image."  And the whole arrangement isn’t even supposed to slow down the browser.

This should help Facebook stay ahead of Flickr, and potentially whatever social network Google’s supposed to be working on, as well.