Online travel site Expedia said today it is launching a Facebook promotion that will offer more than $1 million worth of travel to friends on the social network.

The promotion is called the “Expedia FriendTrips” and people can participate in the promotion by becoming a fan of Expedia on Facebook. Then participants will create a “virtual plane” and will point the plane towards one of a number of vacation destinations. They will fill the plane with five of their Facebook friends , who will need to become a fan of Expedia. 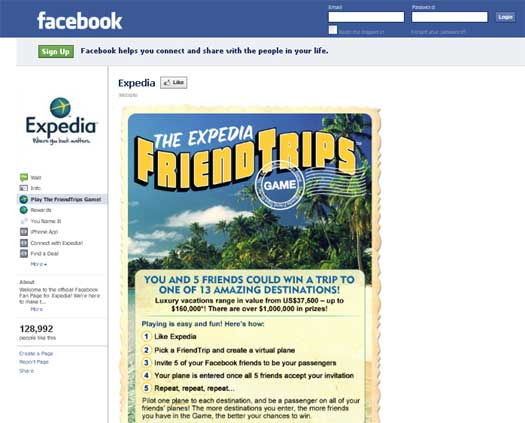 “Expedia FriendTrips is not only the largest sweepstakes ever hosted on Facebook, it is the largest promotion in Expedia’s history by a wide margin,” said Scott Durchslag, president, Expedia Worldwide.

“I believe a million dollars’ worth of free travel will be a magnificent experience for our friends on Facebook.”

Expedia said it would also give away four $250 travel credits daily to contest participants who submit pictures and share stories of why they want to visit a particular place.

Google +1 Is Just The Beginning