The Dow didn’t get off to a great start this week; it’s been in the red for most of the day so far.  A new report predicts that the lingering effects of the recession will benefit the online advertising community, though, with U.S. marketers eventually spending $40.5 billion in 2014.

The years leading up to 2014 should be profitable ones, too.  As the graph below shows, eMarketer is of the belief that spending will be up 13.9 percent this year, and a 10.5 percent increase is supposed to occur next year. 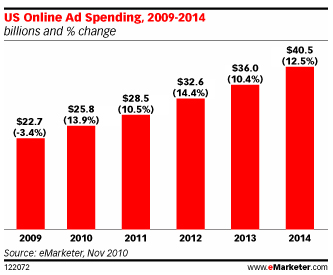 Meanwhile, total media spending is only forecast to increase by 3.0 percent, 1.2 percent, 4.5 percent, 2.0 percent, and 3.7 percent over the same five years.

David Hallerman, the principal analyst at eMarketer, explained in his company’s report, "It may seem ironic, but marketers’ economic concerns are leading them to spend more for online advertising.  This trend reflects how most forms of internet advertising are now seen as more of a ‘sure thing’ than most traditional media."

And we should note that, whether it’s a coincident or not, Google’s stock is up 0.99 percent at the moment.