Elizabeth Taylor: Remembered On The Web

One of the icons of Hollywood has passed away today. Elizabeth Taylor is listed ‘7th‘ on the AFI’s “Female Legends List“. She passed away after a long fight with congestive heart failure. The two time Academy Award winning actress was born into acting. She was blessed with a mutation which gave her double rows of eyelashes, enhancing her presence on screen. The rest is history.

After the initial report, the news spread fast throughout the internet. Of Twitter’s nine natural trending topics, four are in relation to Elizabeth Taylor.

Richard Burton was Taylor’s husband from 1964-1976; their relationship is known as one of the most famous in Hollywood history. Most of the tweets are in relation to the Vanity Fair article – “A Love Too Big To Last”

National Velvet is believed to be Taylor’s initial breakout success; she was only 12 at the time. White Diamonds is a fragrance from Taylor’s line of perfumes, which at its height brought in $200 million in annual sales. 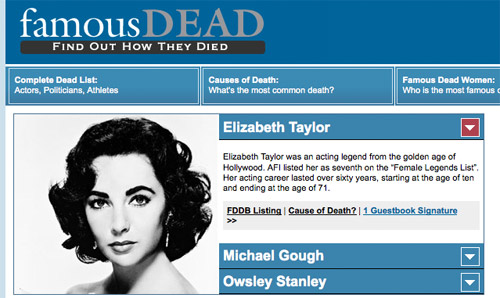 If you’d like to learn more about Elizabeth Taylor, or would like to discuss her iconic career, visit FamousDeadDB.com.

AOL Rated A "Buy" By UBS