Ecommerce Spending Up 10 Percent In Q1

Although the stock market has still been moving up and (mostly) down in a disturbing manner this week, comScore’s provided evidence that the ecommerce market is healthy again.  According to comScore, ecommerce spending for the first quarter of this year was up ten percent on a year-over-year basis. 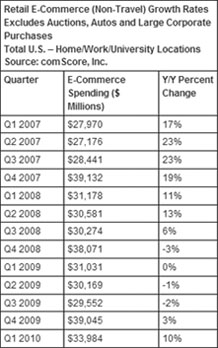 As the table to the right shows, online retail spending approached an impressive $34 billion for the quarter, and comScore’s report emphasized that this is the first time since the second quarter of 2008 that double-digit growth has occurred.

Pessimists would be right to point out that ten percent isn’t the same as 23 percent, 19 percent, or even 11 percent, of course, and Fulgoni outlined some potential problems, adding, "[W]e should note that upper-income households are currently shouldering much of the growth.  Should the economy falter in the second half of the year and upper-income consumers return to a savings mode, we could still see growth decelerate."

Still, it’s hard not to interpret a gain as good news, and with any luck, we’ll see proof of continued ecommerce growth when the stats regarding the second quarter are released.

May 21, 2010
Latest Posts
Registration is disabled.