For the first quarter ending March 31st, eBay reports $2.5 billion in net revenue, which is a 16% increase from the same period last year.

It looks like the growth of eBay’s PayPal service really pushed revenues in the right direction.  PayPal grew in active registered accounts 16% year-over-year.  At the end of the quarter that figure totalled 97.7 million accounts.  This marks the 6th consecutive quarter that PayPal has added around 1 million new accounts per month.

“In the first quarter, PayPal continued to drive strong growth globally, eBay sharply accelerated growth in the U.S. and we announced several acquisitions that we believe will enhance our leadership and innovation in commerce and payments.  The year is off to a strong start,” said eBay Inc. President and CEO John Donahoe. 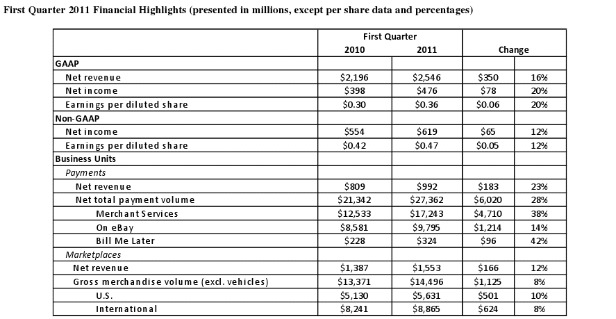 Blame It on the Youth