In support of National Breast Cancer Awareness Month, eBay is asking people to sell, buy or donate through its eBay Giving Works program.

eBay Giving Works allows buyers and sellers to support nonprofits by selling an item and donating a portion of the proceeds.

“In fact, for the value of every laptop sold this month through Giving Works, one uninsured patient could get a mammogram,” said Robert Chatwani, Director eBay Global Citizenship.

“Each person who takes part in this campaign will have an impact on the fight against breast cancer.” 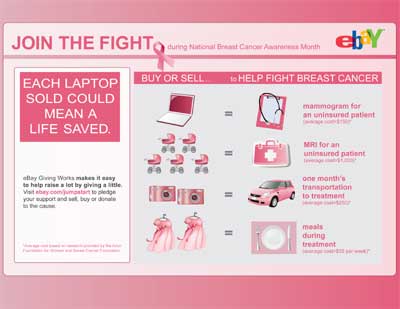 Partnering with eBay on the effort are more than 100 national and local nonprofits including the American Cancer Society, Avon Foundation for Women, Bright Pink, City of Hope and Susan G. Komen for the Cure.

The nonprofits have teamed with eBay for a Hollywood charity auction featuring a meet-and-greet with Honorary Chairman of the Avon Foundation for Women Reese Witherspoon; a VIP meeting with Kristin Chenoweth backstage of the Broadway hit, “Promises, Promises”; dresses worn by Avon spokesperson and singer Fergie, and mark Brand Ambassador Ashley Greene of Twilight; a pink Vespa; and a Cher experience at Caesar’s Palace Las Vegas.

Other items up for bid will include electronics, clothing and accessories, home goods, toys, sports and recreational equipment, books and memorabilia.

Visitors to ebay.com/jumpstart can pledge to support the cause and will be entered to win a holiday shopping spree on eBay. Five $100 eBay shopping sprees will be given away daily throughout the month of October.

Everything You Want to Know About Google TV

eBay Teams Up with Groupon on eBay Bucks