The 8.9 magnitude earthquake that struck Japan and caused a powerful tsunami has captured the Web’s full attention.  This morning, nine out of the ten trending topics on Twitter relate to the natural disasters, the top Google Trends look rather similar, and Google’s released a new version of its Person Finder.

We’ll start our overview with a link to the Google Person Finder for the sake of anyone who has friends or family in Japan.  As with earlier versions used in Chile, Haiti, and New Zealand, it’s a tool that allows individuals to look for or provide information about someone, using either partial or full names.

That should help people confirm the well-being of their loved ones, although hopefully there won’t be too much uncertainty in the first place.

Then one other thing Google’s done is post a tsunami alert on its homepage in the event anyone hasn’t received word of the threat.

As for the top Google Trends and Twitter Trends, you can see them below, and with the exception of Casey Abrams (an American Idol contestant) and Kjeld Nuis (a Dutch speedskater), they’re all connected to the earthquake and resulting tsunami. 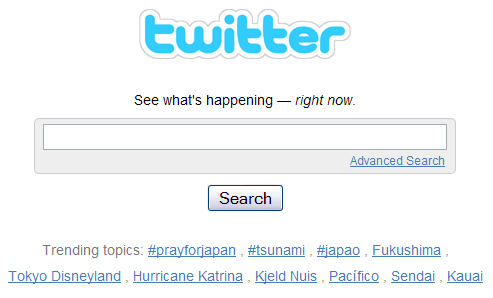 Best wishes to everyone who’s been affected.