Earth Hour is fast approaching, and in a little over four days millions of people will flip off the lights to show solidarity in the cause of protecting Mother Earth.  The simple act may reflect an effort to use less of the earth’s resources, but the people behind Earth Hour are doing all they can to promote the event through technological resources.

If you forgot, Earth Hour started in Sydney, Australia when in 2007 millions flipped off the lights for one hour.  A sustainability movement was launched out of that action and now it has become a global initiative.  Earth Hour is promoted by the WWF (World Wildlife Fund in the U.S. and Canada, World Wide Fund for Nature everywhere else).  The new campaign this year is called “60+” and refers to the mission to extend eco-friendly action for longer than 60 minutes.  From earthhour.wwf.sg:

“This year Earth Hour will become Earth Hour + seeking action not just for 1 hour, but commitment to ongoing change. We want to capture what is being done, the change that is taking place in our world and allow these actions to inspire more action.”

With this goal in mind, the WWF has launched a new iPhone app.  It is called “60+” and is available right now at the app store. 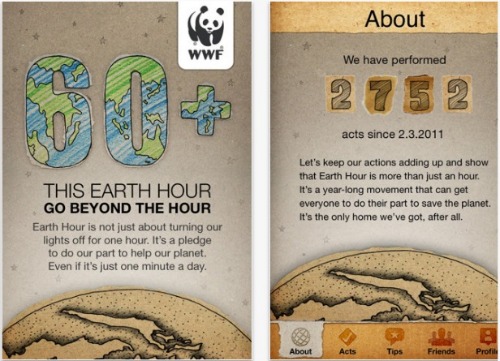 The app has facts and tips for conscious living, but it mainly functions as a tool for check-ins.  No, not places but activities.  Users can check-in when they ride a bike to work or fix a leaky faucet.  Utilizing the fact that everyone loves a game, they have also included badges and achievements in the app.  You can even show your friends how much you love the planet with full Twitter integration to share check-ins. 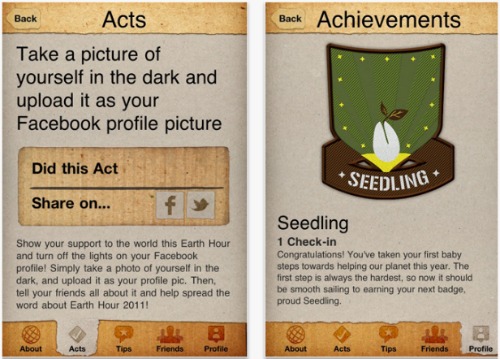 Also available for your perusal is beyondthehour.org, where people post pledges that become little gray squares to be clicked.  Once clicked, you have the option to share the pledges via Facebook and Twitter.  I wonder if the page uses more energy to display than other pages? 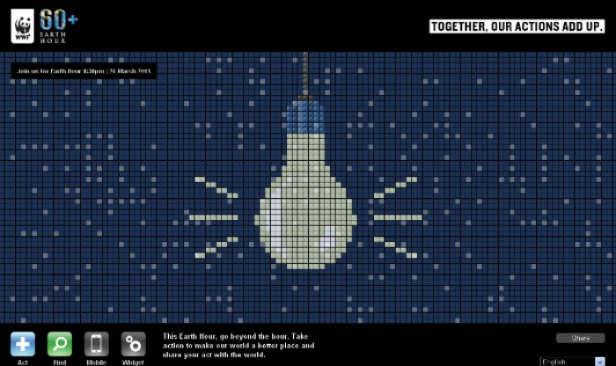 What Bing Is Doing to Stay Strong in Search