There’s good and bad news for Google this morning with respect to Android and the mobile market.  In terms of how many units were sold during their first 74 days of availability, it seems the Droid beat the iPhone to the million-unit mark, but the Nexus One is lagging far behind.

That’s the state of things according to Flurry, which claims that applications using its analytics tools have been embedded in more than 80 percent of iPhones and Android devices.  And anyone who’s suspicious of the firm’s stats should know that Goldman Sachs has used them as the basis for some forecasts, too.

So on to the comparison.  You can see the results below.  FYI: Flurry picked a 74-day period because that’s how long Apple said it took for one million iPhones to sell. 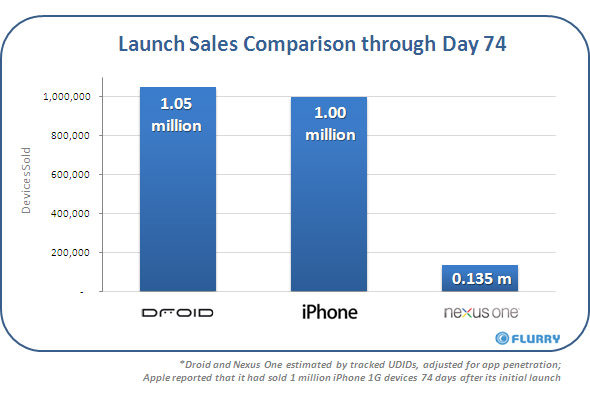 Flurry noted that the Droid enjoyed several advantages here.  First, the iPhone had already taught consumers about the benefits of smartphones.  Verizon also boasted more subscribers than AT&T, and the Droid launched towards the start of the holiday shopping season.

Android can definitely compete with the iPhone, then.  The Nexus One’s lack of success just makes it hard to judge what sort of circumstances are needed to even the odds.

Is Wikipedia on the Road to Becoming the Next DMOZ? (SXSW)