Does Windows Phone 7 Have What it Takes?

One of the big questions this year is: Will Windows Phone 7 succeed? Windows Phone 7 devices went on sale in the U.S. this week, and the world is waiting to see if Microsoft can finally carve out a real name for itself in the mobile space. WebProNews spoke with New York Times tech columnist David Pogue today, just off his keynote at PubCon Las Vegas about this (among other things).

Do you think Windows Phone 7 will be a success or a failure? Will it win the hearts of consumers the way the iPhone and Android have? Tell us what you think.

Pogue says, “I’m really torn, because I think they did an absolutely beautiful job. What turns me on in this job is ideas, you know? I’ve always resented Microsoft just being copycat, copycat, copycat. I mean over and over in any industry, they just take something popular and write their own version of it with no new spin. This is a really new spin.” 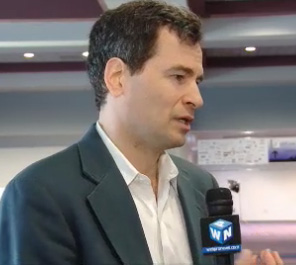 “And it’s missing a lot of pieces,” he notes. “…copy and paste, multi-tasking, ringtones, and so on…and of course there’s no apps for it.”

To be fair, we’ve seen a number of apps launched this week. Yelp and Google’s search app come immediately to mind. It will be quite interesting to see the kind of adoption the latter sees on this platform, given that Windows Phone 7 is such a potential game-changer for Microsoft’s search market share. Windows Phone 7 becoming popular would mean a great deal of Bing use by default…that is unless everybody downloads the Google Search App.

Of course, that is irrelevant if the platform itself doesn’t succeed. “My spirit says I want them to succeed,” says Pogue. “I want there to be three platforms by big companies that won’t go away, but my heart tells me it’s going to be really tough, even though it’s a brilliant job. I mean it’s so late and there are so many missing pieces.”

“Apple and Google are always just going to be continuing to innovate, so…I’m no good at prognostication, but my gut tells me it’s going to be tough,” he says.

“But, this has happened before,” he points out. “Microsoft wanted to be Palm Pilot in the late nineties, and they came out with their Palm Pilot and it was awful and it was late, and it was missing features, and they just kept hammering…it took like five years, but they finally became something…”

As far as Windows Phone 7 goes, he says, “They are not going to lie down for years, for billions of dollars, so…too soon to count ’em out.”

Too soon indeed. Microsoft’s new mobile OS does have that Windows brand behind it, and the company has also proven with Bing that it is perfectly capable of generating a great deal of buzz through a sizable marketing budget.

It’s also got variety in both carriers and manufacturers working for it, unlike Apple with the iPhone. This strategy seems to be working pretty well for Android.

Will you buy a Windows Phone 7 device? Let us know.