Does Apple’s iAd Have the Right Stuff for Mobile Advertising?

This week, among other things, Apple unleashed its new mobile advertising platform called iAd. This is based on the company’s acquisition of the mobile ad platform Quattro earlier this year.

iAd is seen as a direct competitor to AdMob, which Google is still in the process of trying to acquire (the announcement was made in November), and Steve Jobs has even said Apple tried to acquire itself. The AdMob deal has been under scrutiny from the Federal Trade Commission, to determine if it would reduce competition in mobile advertising. Seeing as how Apple has now unveiled its own direct competitor, one would think that it would help Google’s case for getting its AdMob deal done.

If so, perhaps it  will all work to Google’s benefit. They can see what Apple has done, what works about it, and what doesn’t. Apple put out the iPhone, then along came Android, and Android use is skyrocketing. Can Google repeat this with mobile ads? Apple shows how it’s going to do mobile ads. If the AdMob deal goes through, Google will then show the world its own plan (beyond the following). 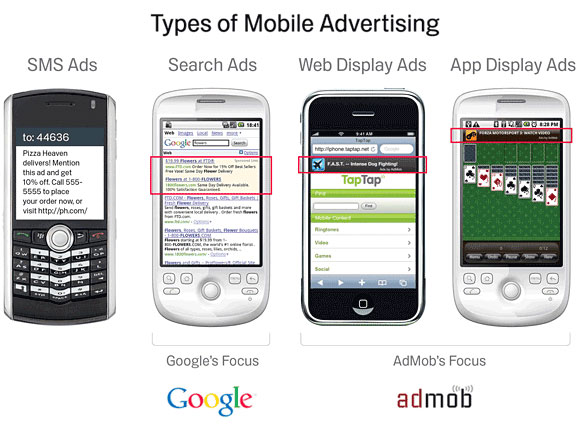 iAd lets developers include ads in their apps (HTML5 – No Flash) that keep the user within the app. Ads will reportedly have access to many of the APIs other apps have access to.  Apple gives 60% of the ad revenue to the developers.

Someone within Google has reportedly (and anonymously) already ripped iAd. Clearly, they are already thinking they have a better strategy, or at least want people to think that. Silicon Alley Insider reports the problems with iAd cited by this person:

– Creative agencies build ads in Flash. There is no comparable tool for creating HTML5 creatives. There is no "IDE" for this. So those ads looked great in the presentation but the odds are that Apple (or Quattro) built them custom for the clients. How does this scale to hundreds of campaigns?

– As a media agency (e.g. Publicis, Havas, etc) how do I determine the right targeting, etc to execute the buy to my satisfaction. Since this is a close ad network run by Apple I guess you’ll just have to trust them that they’re giving you a media plan that meets your objectives. "I want to reach young men who are interested in sports" –> how does this get translated into a media plan? If Apple does all the work, then how does an agency add any value to the process?

– How would I measure results? It’s not clear what metrics Apple will provide advertisers. Whatever they are, they won’t be a) audited; b) comparable against anything else; c) integrated into the systems advertisers use to measure overall results.

– Oh, also, how will these ads be priced exactly? Will it be an auction like AdWords? Or will it be a rate card Apple controls?

Much of this sentiment has been echoed throughout the industry in general, by non-Googlers.

One clear advantage Google has in mobile advertising is that it already has search advertising. Apparently Steve Jobs would like people to think that people aren’t using search on their phones (based on his comment: "People aren’t searching on their phones.") which I have a hard time believing, considering the amount of searching I do on my own phone. If that were the case, however, that ought to help Google’s case even more, as far as competition.

iAd may further Apple’s head start in in-app ads, but it’s possible that Google won’t be too far behind if  the FTC views iAd as a competitor to AdMob (although recent reports indicate the FTC is leaning toward blocking the deal, the iAd gives Google some ammunition). Android usage is still growing rapidly, and Google is still the default search engine on the iPhone as well, at least for the time being.

The competition between Google and Apple gets more interesting by the day, and it doesn’t look like that will change anytime soon.