Five reporters from radio stations in in Canada, France, Belgium, and Switzerland are going to spend five days locked in a French farmhouse with only Twitter and Facebook to get their news. It’s not a lame reality show, but an experiment looking at the quality of news from social media.

This experiment may be flawed from the start. One can almost imagine that people will purposely put out false information via Twitter and Facebook just to mess with these people (they can be followed on Twitter [updates in French]). Reporting on this story, AFP’s Marie-Dominique Follain asks if social media is really a serious threat to established media.

Is this a worthwhile experiment? Tell us what you think.

It appears that the credibility of social media as a way to get news is what is coming into question (not that this is the first time that has happened). "People tweet about fake events. Social media is rife with hoaxes," people will say. Yes, that’s true.

People do put out false information, but what seems to be overlooked is that Facebook and Twitter are just the platforms for people posting their updates. They often are accompanied by links to blogs and traditional news sources. While the group have agreed to only connect to the outside world through Facebook and Twitter, and no web surfing, they are reportedly still allowed to follow links to outside sites from these social networks. With the 140-character limit of Twitter in particular, linking out is often very necessary in getting the whole story across, or at least gaining access to that story from the reader’s perspective.

Maybe I will be proven wrong, but I don’t see any possible result coming from this experiment that indicates social media is not useful for finding news. I don’t believe social media threatens traditional media. It complements it, in a variety of ways. 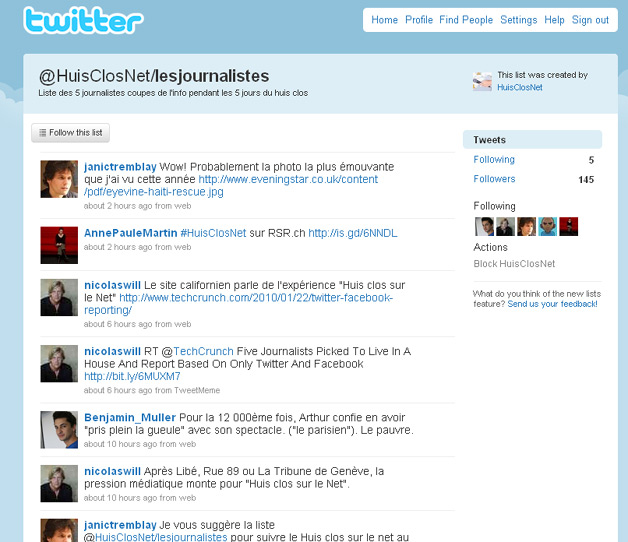 Sometimes stories break there before they are reported by a traditional source…that’s a source for that traditional channel. It could just as easily come from someone saying something in a crowded bar. If it’s newsworthy, it might be worth covering, but it might be a lie, and facts are worth checking. It’s just that with channels like Facebook and Twitter, those bars are as big as the entire world, and the patrons aren’t all there to relax, drink, and have a good time (though some of them certainly are). Some of them are there to spread news. And people know that they can get news there because of that very fact (a study last year found that news was a top priority of Twitter users).

Not all news breaks on social media (although the ever-increasing accessibility to social media through mobile seems to be greatly narrowing the margin), but social media is always there for open discussion about the news, which tends to make for a more rounded outlook on any particular event. It doesn’t eliminate the bias, but it provides a means for all biases to come together to form a more complete view of the story. Open discussion allows for points to be made that wouldn’t necessarily be made by a traditional news outlet because maybe that outlet does have some kind of bias, even if it strives not to. Some say everyone has some bias.

The fact that people do turn to social media for news emphasizes the fact that they do want a look at the whole picture, and do want to have open discussion on matters. True, some of that is pointless noise, but strewn throughout that are often important facts and otherwise unconsidered viewpoints.

So what can this experiment really prove? That you can limit yourself to social media for news sources if you want? Isn’t the point of social media (at least in the news sense) to strip away the limitations? Share your thoughts.

> Is the New York Times Jumping the Gun on Paid Content?

> Is This the Answer for Online News Revenue?