If you ever need proof that truth is stranger than fiction, simply give this story a read. It tells of how a newspaper site ripped off a blog over a story concerning the legitimacy of DirecTV’s viral campaign regarding fictional Petite Lap Giraffes.

Ian Dennis Miller runs a site called localshow.tv, a nifty music video player. He also writes on a personal blog, of which he released an article titled – “Petite Lap Giraffes: Real?” In the article, he writes about research he conducted to find out if Petite Lap Giraffes are real or not. He cites some specific research, concerning the Petite Lap Giraffe site’s URL registration, by way of a WHOIS query, and this photo which originated from a stock photo website.

The story becomes particularly interesting when Miller discovers that LongIslandPress.com used his research to release their own article , without a creditable link directed towards Miller’s website. As any blog owner would do in his situation, he called LongIslandPress out on their exclusion. He did so by posting a comment on the article, getting straight to point without being nasty.

Let’s see if you can guess what LongIslandPress did next, after Miller called them out. Did they:

A.) Admit to the link exclusion, apologize, and keep the story up on their site since it’s sort of funny in a tongue-in-cheek sort of way.

B.) Retract enough information from the original article so they could use information that is attainable through easy means.

C.) Take the article offline, and wash their hands of any wrong doing. Even after search engines crawled their site for content.

Sorry, it’s a trick multiple choice test. Answers B.) and C.) are both correct. The original article written by LongIslandPress included Miller’s research regarding the stock photo image. However, Miller kept up with the article and discovered the stock photo information was taken down. However, the WHOIS domain information, which can be discovered easily by anyone was left up.

Miller’s story caught a bit of steam, and was eventually posted on Slashdot. All the negative attention lead LongIslandPress to take down the story.

Go ahead and file this story under “Newspaper sites that aren’t ready for the internet“. While LongIslandPress is a regional paper and doesn’t have the attention of other major newspaper sites, it paints a portrait of how the needless fight between newspaper sites and blogs rages on. Miller could have really made more of his story, but instead had a bit of fun with it and kept everyone updated with the proceedings. The remarkable part of the story is all of this could have been avoided if they just posted a single link to Miller’s site.

If you haven’t seen the latest DirecTV commercial with the Petite Lap Giraffe being featured, here’s the YouTube video. It’s really quite genius.

UPDATE: It looks as though LongIslandPress.com has seen enough heat from the internet, and have now posted the article with creditable links attached.

UPDATE (04/18): The official Petite Lap Giraffe website has received a rather interesting update. The original video posted on the front page featured a recording, which could have easily have been doctored. They’ve now added a live feed, which has an up-to-the second time code in the top left corner.

The caption below the feed reads: See what our Bull Vladimir do around farm! If not see him, don’t worry he come back. 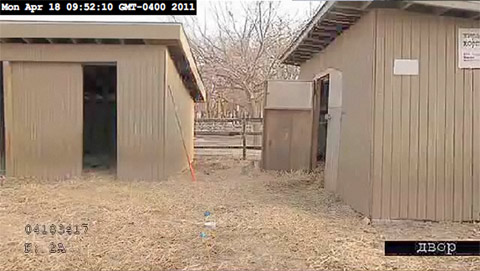 If people were ready to believe in Petite Lap Giraffes before, imagine how they’ll be fooled by a seemingly live video feed.