As the news of Google Chrome’s increase in browser market share hit the tubes, some outlets took this as an opportunity to blast Microsoft’s ubiquitous browser, Internet Explorer.  While it’s still pretty en vogue to hate all things Microsoft; although, it feels that should be passé by now, perhaps some of the IE hate was a little forced?

Take the following two approaches, for example.  Both of these upcoming sites reported on Google Chrome’s increase, and parlayed their post into something about Internet Explorer.  However, the approaches were distinctly different.  First we have TechRadar’s post: 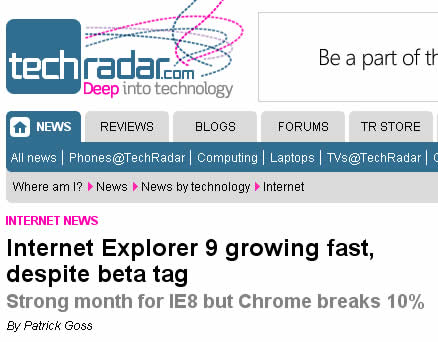 See how nice it is?  Not so for The Inquirer: 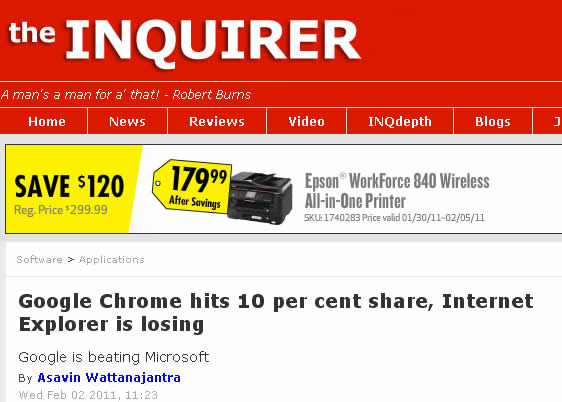 Here are two very different approaches to essentially the same story.  On one hand, you have this from The Inquirer:

But for Microsoft and Internet Explorer, the outlook looks pretty bleak, unless the new version coming out this year really does well. Since July, Internet Exploder’s share of the browsing market has decreased from 60.74 per cent to 56 per cent in January.

That might not sound like a lot, but it means millions of users are leaving Microsoft for other web browsers.

Microsoft’s internet Explorer 9 beta has been downloaded 23 million times, and now accounts for 0.5 per cent of all internet users worldwide, according to Net Applications.

Although it is still in beta – IE9 has proven a hit for Microsoft as it looks to offer a ‘more beautiful experience’.

So what should a reader take from all of that?  Perhaps they would be smart to separate the biases out of each article and see the news for what it is:  Tons of people still use Internet Explorer — it is still the default browser on all Windows machines — but yet some web users have switched to other brands.

Does this mean the end is nigh for Internet Explorer?

56% of Internet traffic still uses Microsoft’s browser, compared to 44% for all the rest.  Clearly, IE isn’t going anywhere anytime soon.  All it means is people have choices and some are willing to leave their comfort zone and try other options.

On the other hand, should Microsoft enter trance-like state of “We Are the Champions” and put Internet Explorer on a “set it and forget it” status because their marketshare is so dominant?  Of course not.  It’s easy to be number one when you have a head start on the rest of the competition, but being the best and being first isn’t always a congruent avenue.