Demand Media announced that it has entered a partnership with Buddy Media to extend Demand Media’s Pluck social applications into the Facebook ecosystem.

Buddy Media has built a business out of creating Facebook tools for businesses, and it counts Target, Johnson & Johnson, ABC, and many other big brands among its clients.

Pluck VP, Marketing Jason Jaynes explains, “Our first application for Facebook pages, Pluck Forums is available starting today. Using the Buddy Media platform you can now quickly embed the Pluck Forums running on your site directly into your Facebook page. This allows you to bring the conversation already happening on your own sites to Facebook where a significant portion of your consumers and fans spend their time. Even better, it allows your consumers and fans to engage in the conversation without ever leaving Facebook.”

This is similar to how Facebook’s new comments system operates, but this is more than just a blog comments system. Pluck points to an example of the platform in use by the Dallas Cowboys, which have a fan community set up, in which fans can interact (via the same conversation) from the Cowboys’ site or from their Facebook Page. 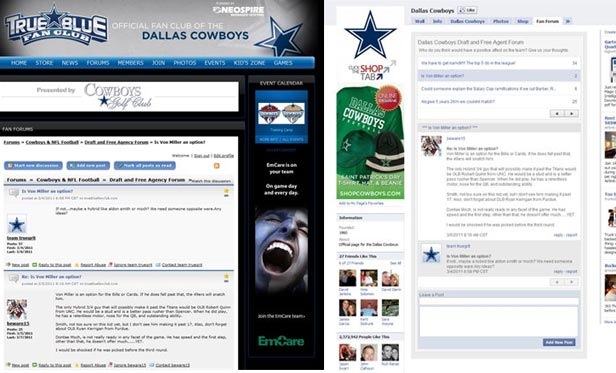