Last week, Google’s Matt Cutts put up a blog post talking about a shift in focus to content farms, which he defines as "sites with shallow or low-quality content". Most people that read this assumed he was talking about sites like some of those offered by Demand Media (eHow.com, for example), which launched an IPO this week valuing the company at $1.5 billion.

It’s not that people thought Cutts was talking only about Demand Media, but most of the time when an article is written about "content farms", Demand Media is cited, as it has basically become the poster child for the phrase.

Cutts then announced that Google has implemented an algorithm change, but things are still rather murky with regards to whether or not this one embodies a change geared at content farms and/or sites like those from Demand Media. Cutts refers to "one thing" he mentioned in the original post that the new change is geared towards, but does not mention content farms themselves. More on this here.

Peter Kafka at AllThingsD had a conversation with Demand Media CEO Richard Rosenblatt who maintains that a. Demand Media is not a "content farm" and b. Matt Cutts was not talking about Demand Media in the post.

Rosenblatt is quoted as saying, "It’s not directed at us in any way," in reference to Cutts’ original comments, though he declined to comment on whether or not he talked to Google about it.

He is also quoted as saying, "He’s talking about duplicate, non-original content. Every single piece of ours is original. Written by somebody. And I understand how that could confuse some people, because of that stupid ‘content farm’ label, which we got tagged with. I don’t know who ever invented it, and who tagged us with it, but that’s not us…We keep getting tagged with ‘content farm’. It’s just insulting to our writers. We don’t want our writers to feel like they’re part of a ‘content farm.’

That’s fair. Nobody can blame Rosenblatt for not wanting the label, and the company has indicated repeatedly that it has stepped up efforts to improve its quality – though they clearly have a ways to go to reach a high level across the board. 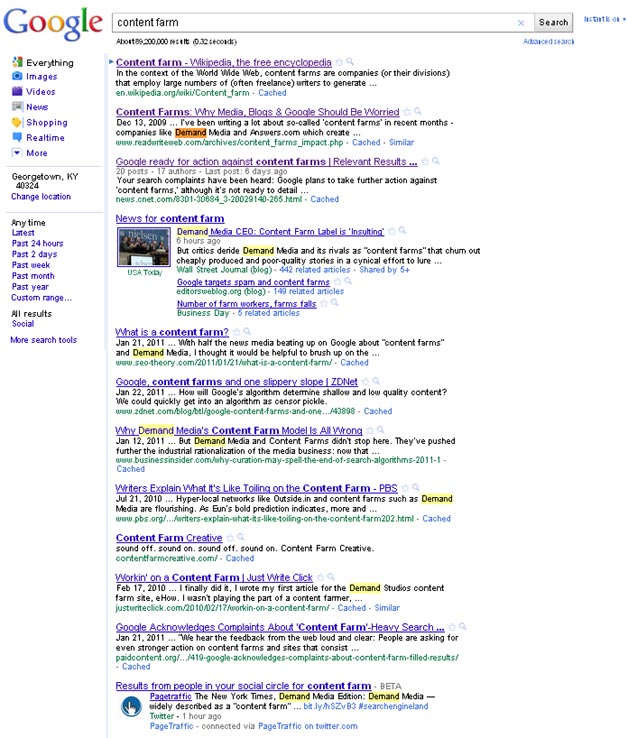 Cutts did say Google was evaulating a change that "primarily affects sites that copy others’ content and sites with low levels of original content," but that  appears to be in reference to "pure webspam", as he says, quickly following that with, "attention has shifted instead to ‘content farms,’ which are sites with shallow or low-quality content."

Now, that’s not to say that there aren’t benefits to Google that come from Demand Media. As Rosenblatt says in the interview, their partnership "makes sense."

"We help them fill the gaps in their index, where they don’t have quality content…We’re the largest supplier of all video to YouTube… we’re a large AdSense partner. So our relationship is synergistic, and it’s a great partnership," said Rosenblatt.

At PubCon in November, Matt Cutts said there was a debate going on internally at Google over whether they should consider content farms web spam, saying they were wrestling about the topic. He said that users were pretty angry with content farms, adding that there may be a time for web spam at Google to take action against them.

According to Rosenblatt, Demand’s traffic only went up when Google implemented changes last year like Mayday, Caffeine, and Google Instant, but it’s hard to see how Google’s new approach will help it. Cutts said in his post, "We hear the feedback from the web loud and clear: people are asking for even stronger action on content farms and sites that consist primarily of spammy or low-quality content."

If "people" are asking for stronger action on "content farms", are these not the same people tagging Demand Media with the label?

If Demand Media and other sites that are commonly labeled as content farms want to continue to reap the Google rewards, they’re going to have to keep up the quality  – that is if Google truly does take action like it has indicated, which we’ve really yet to see so far.

You can still search for "level 4 brain cancer" on Google and the top 2 results are from eHow. The top one comes from a freelance writer with a background in marriage psychology and family therapy, whose other featured articles on the site include titles like "Kohler Toilet Won’t Flush Completely", "Roper Dryer Won’t Start", and "My Toilet Water Smells". 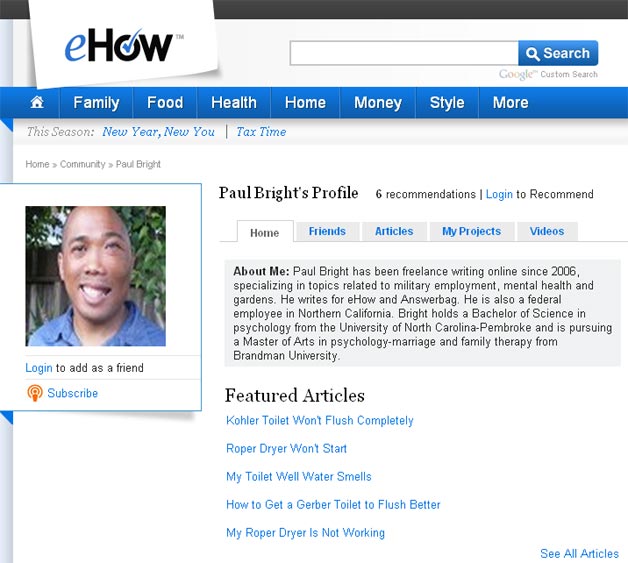 Again, nothing against the author or even the article, but is it really the first thing that Google should be showing to someone searching for a term like "level 4 brain cancer". Wouldn’t a more medical-related site make more sense – even the local results that Google is pushing so often lately for maybe? How about the National Brain Tumor Society at braintumor.org, which is displayed in the paid results on the right-hand side of the page?

The second result is also from eHow, and THEN a guide from the MGH Brain Tumor Center. Also included in the top ten – results from Associated Content and Yahoo Answers. Some content from the A.P. John Institute for Cancer Research is the last result on the page. You get the idea. 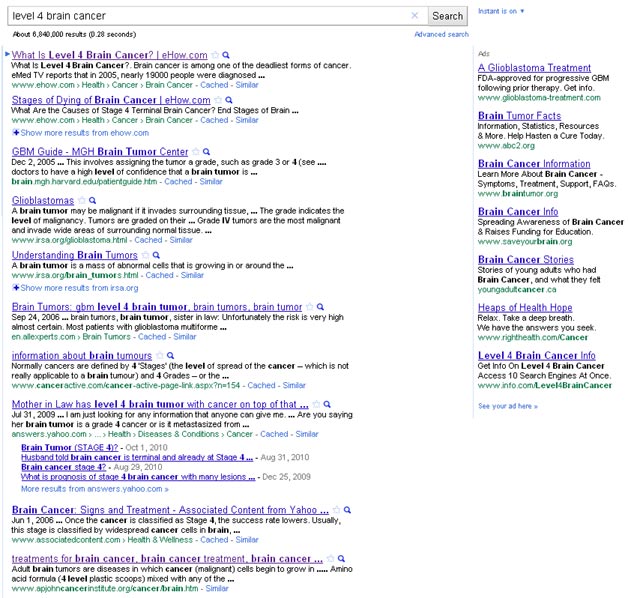 Is this not the kind of thing Cutts was talking about when using the phrase "content farm"? The top article does not even have any links in it referencing expert information (though it does have ad links) – no way to know if the source is trustworthy or if the information is accurate – nothing to back anything up (though Rosenblatt has claimed in the past that medical articles are fact-checked with doctors). That’s not to say it’s not an accurate article, but how is the reader supposed to know? How is someone with brain cancer searching for information on the subject supposed to gain anything helpful from this without questioning it? This is just an example, and it’s not that the article shouldn’t have been written, but should it be the most prominent piece of information related to this query?  There is no information on the page indicating that the writer is in any way an expert on the subject of brain cancer.  He’s simply an "eHow contributor".

As far as Demand "filling in the gaps" for Google’s search results, it may have accomplished that, and moved much further into saturating the areas were there are no gaps.

Therein lies the problem. This is why people are "calling for action" on content farms, as Cutts says. Most critics will even acknowledge that there is plenty of high quality content coming out of Demand Media, Associated Content and others, but all too often it isn’t the highest quality choice of content for the queries for which it is being presented as such.

Google will not come out and say whether or not it considers Demand Media a content farm. Even Bloomberg BusinessWeek reports they’ve been ignoring the question from them. That publication calls Demand a content mill, after interviewing its chief innovation officer.

Is content from so-called "content farms" hurting people? Probably not. I like to think people can figure out on their own what content to trust, based on the information and credentials required, and that more content also means more options to help you make more informed decisions, but that doesn’t mean the good content is always easy to find under Google’s current system. Sometimes the more relevant content is buried, and the user has to work harder to reach that goal of the informed decision.

Recent articles on this topic:

– Is This Google Algorithm Change About Content Farms or Not?
– Should ‘Write To Rank’ Articles Be Punished by Google?
– Google: Are You Really Serious About Removing Web Spam?
– The Real Problem With Content Farms is Google
Share This
Previous Article