eHow, Demand Media’s most heavily trafficked property, which frequently has how-to articles ranking very well in Google resutls (not to mention videos in YouTube),  just announced a big change to how it provides content. I had a conversation with eHow General Manager Gregory Boudewijn and Stewart Marlborough, the general manager of Demand Studios (the content arm of Demand Media) about what this means for readers, as well as content contributors.

Do you think the Demand Studios approach is right for eHow? Comment here.

Up until now, eHow has essentially had two ways in which it has gotten its content. One way is from Demand Studios, the somewhat controversial algorithm-meets-human content production machine for Demand Media (CEO Richard Rosenblatt explained more about how this works at SXSW last month). The other way is from eHow’s Writer Compensation Program, which lets writers contribute their own content without being reviewed by a copy editor. These articles aren’t rejected, and the writers aren’t evaluated, whereas the Demand Studios content goes through the process described by Rosenblatt, which I described as exhaustive (copy editors, fact-checking, etc.).

Some commenters took issue with that description, as it’s applied to eHow’s content, and Boudewijn and Marlborough acknowledged that offering these two different brands of content through eHow has been confusing. That is why they have just made the announcement that all eHow content from here on out will only come from the Demand Studios method. "It’s only fair," they tell WebProNews.

"We want to make sure there’s continuity in the library," says Boudewijn. "It’s a big change, but we really feel like it’s the right one."

Demand Studios powers the creation of over 100,000 articles per month. Compensation from Demand Studios is more flexible than eHow’s Writer Compensation Program, as you can write articles with a guaranteed, upfront payment and get paid twice a week, the company says.

Writers can also continue writing articles with revenue-sharing agreements similar to what the eHow.com writing community is accustomed to now, the company adds. In addition, writers can be offered the opportunity to write for other websites in the Demand Media family, including LiveStrong.com, Answerbag.com, Trails.com, GolfLink.com, Cracked.com, etc.

For example, if a writer is found to use a comedic twist in various articles that have been published on eHow, or in other places, they may be asked to write something for the company’s comedic site Cracked.

Demand Media gave us the following table, comparing the different aspects of the Writer Compensation Program and the Demand Studios method: 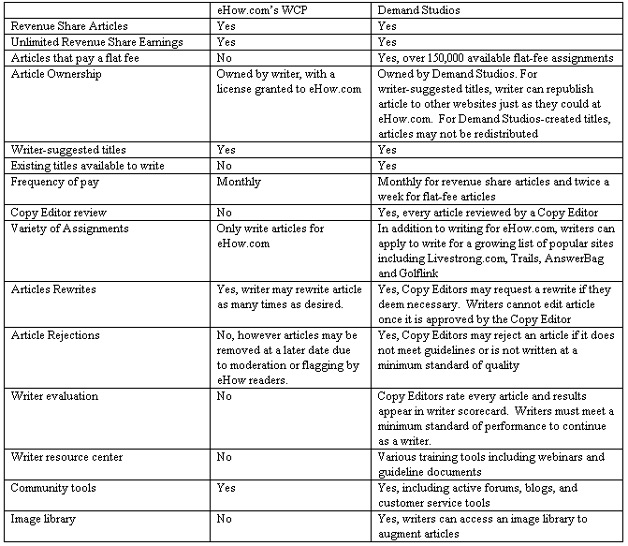 Boudewijn and Marlborough say they will be communicating with all writers so they are aware of the process, and they are expecting some amount of backlash. "I’m sure we’ll feel some backlash for this but it’s backlash we can accept," says Marlborough.

"Ultimately, we’re running [a] business for the long term, and we set the bar very high," says Boudewijn. "We’d rather be known as a company that sets the bar high."

Some eHow writers will be pre-approved into the Demand Studios fold. Everyone will be invited, they say, but some will already be pre-approved. "We’ve been moderating our member-submitted articles on eHow for over a year now," says Boudewijn. "We definitely rely on community to tell us which content is useful and which isn’t useful."

It should be noted that the Writers Compensation Program isn’t just ending. It’s being closed to new participants, but current members will continue to earn revenue off articles they’ve produced.

Marlborough says the revenue share program is something the company is trying to enhance and expand, but if that doesn’t suit writers, they have other options (see table).

We’ve had comments from readers talking about the removal of articles by Demand/eHow in favor of leaving up similar articles that don’t make the writers as much money (meaning less money Demand would have to pay out). Marlborough says this is just not the case, maintaining that the only reason they would take an article down is for quality standards – if it doesn’t meet them. "We’d never do that for somebody’s article who is making a lot of money," he says. "That’s kind of articles we want."

Do you think eHow is making the right move for its content? For writers? Share your thoughts here.

Why Facebook's News is Great News for Your Site's Traffic