DealOn, which has declared itself "Groupon’s biggest threat", has announced the launch of what it calls the web’s first ever daily deal offer exchange called OfferEx. "Think DoubleClick for daily deals. This is revolutionary and reduces the risk and increases profits for both sides of the table," a representative for the company tells WebProNews. She calls it "a technology that will level the daily deal playing field."

OfferEx lets daily deal suppliers upload offers for distribution to third-party resellers, like daily deal sites and newspapers. Resellers can tap into OfferEx to choose the deals they think their audience will best respond to. 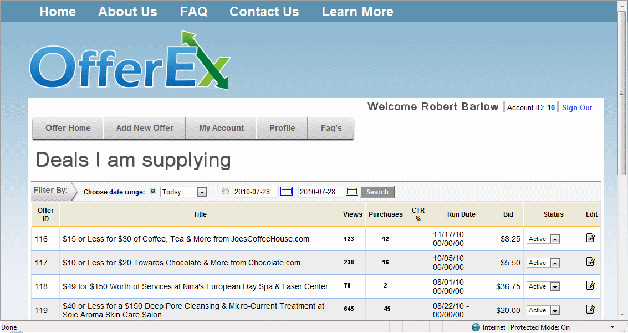 "It’s the deal supplier whose doing the bidding because they are trying to encourage distribution," she explains. "The bid is essentially the commission a deal supplier is willing to pay for each voucher sold on their behalf.  Obviously the higher the bid, the more resellers are going to feature the deal and push the offer to their consumer audience."

"Since we also own Adblade, the largest premium only ad network on the Web, we are very familiar with providing a platform for advertisers and publishers to connect," she continues. "Right now Adblade ads are on 1100 premium sites reaching just over 144 million users monthly. OfferEx Is no different in that it seamlessly connects advertisers (suppliers) and publishers (resellers). You can be a supplier and a reseller at the same time too."

While DealOn may consider this a threat to Groupon, Groupon itself hasn’t expressed much anxiety about competitors. CEO  Andrew Mason talks a bit about it in this recent interview with TechCrunch.

DealOn says its getting ready to announce some "major" strategic alliances in the coming weeks. We’ll keep an eye out on what that entails.

Study Indicates 60% of Handsets Will Have Mobile Browsers in 2015