Google has been granted a quite interesting patent for "Claiming Real Estate in Panoramic or 3D Mapping Environments for Advertising". The company filed the patent back in the summer of 2008. The abstract reads:

Signs, posters, banners, and billboards are frequently mentioned throughout the Patent. So is "street view". The patent is fueling a lot speculation about plans from the company to sell advertising on billboard imagery throughout Google Maps Street View.

ReadWriteWeb who appears to be first to report on the actual patent says, "it looks like Google could potentially identify some billboards and banners in Street View images and then replace these real-life billboards with virtual ads from the highest bidders".

Interestingly, Tom Krazit at CNET talked about this concept briefly in a recent article discussing a Google presentation in Europe in which Google talked about Street View advertising.

"In the presentation, Google tossed out the notion that ads may one day appear in Street View, the feature in Google Maps that lets searchers navigate down an ever-increasing number of city and town streets around the world," writes Krazit. "Those ads would be tied into the listings in the Google Local Business Center and the Google Favorite Places program, which lets participating merchants put signs in their windows with bar codes leading to additional information or special offers."

Here are the areas where Street View is currently available: 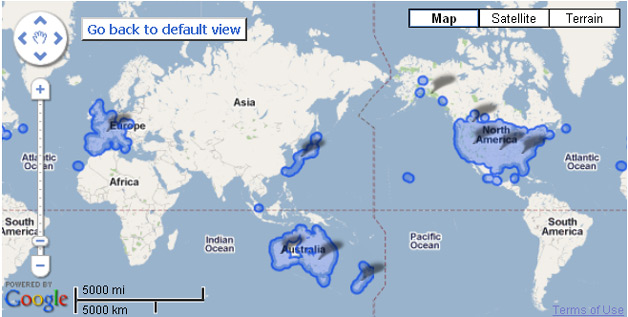 The patent raises a lot of questions. We don’t even know for sure that Google will do this, but it certainly does seem like a possibility. Google did recently start incorporating AdSense into Google Earth, seemingly sidestepping its own guidelines for AdSense on desktop applications.

How would the advertisers of the real-life billboards feel about this? Of course billboards change over time, and likely much more frequently than Google’s imagery is updated, so there is a good chance that advertisers will find others advertising on the real estate they currently hold in the real world in Google Street View as it stands now. Still, it is hard to imagine this scenario going down without any hiccups and possibly legal challenges. It’s something to keep an eye on, and potentially a very interesting new way to advertise.

IT Spending Set For Global Rebound In 2010