Data breach incidents cost U.S. companies $204 per compromised customer record in 2009, compared to $202 in 2008, according to a new study from the Ponemon Institute and security firm PGP. 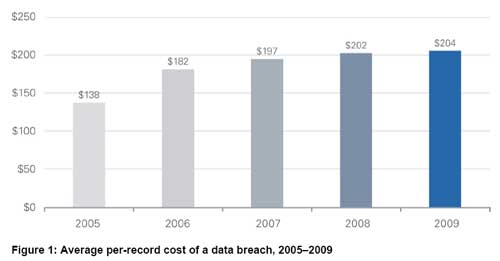 Highlights from the study include:

"In the five years we have conducted this study, we have continued to see an increase in the cost to businesses for suffering a data breach," said Dr. Larry Ponemon, chairman and founder of The Ponemon Institute.

"With a variety of threat vectors to contend with, companies must proactively implement policies and technologies that mitigate the risk of facing a costly breach."

> Spam Is Getting More Malicious