Over the past year or so, Facebook has made a number of moves, which bring more Twitter-like functionality to the social network. Some question why Facebook would want to become more like Twitter given that it is much more dominant in the social media space, but Facebook sees the growing-popularity of Twitter, and likely wants to make sure it offers everything users want, to keep them around for the long haul.

The latest Twitter-like feature to come to Facebook is the "share" button, which is pretty much Facebook’s answer to Twitter’s "retweet." The feature was rolled out over the weekend, and appears as a text link on posts in your news feed that stem from links ("share" is currently not an option for regular status updates, photo uploads, etc.).

Just click "share" and you are presented with a pop-up window that allows you to share the link, and says "Via username" (although you can remove this): 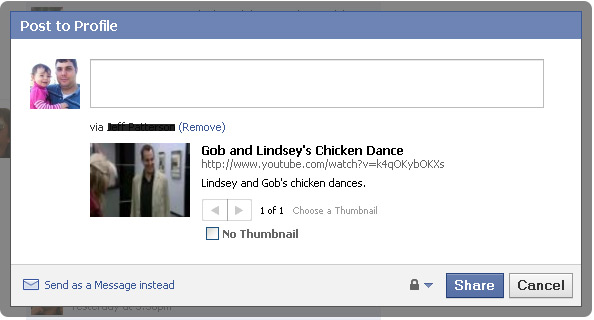 Just like that, you have passed the link on to your own friends, which may or may not include a variety of people who aren’t friends of the original poster. This in effect makes Facebook an even more valuable tool for content publishers. It will help content go viral, spreading through new audienceses.

For some pros and cons of retweets, read this article. You can now apply some of these to Facebook’s share feature, because it works about the same (without the 140-character limit).

> What’s Not to Like About Twitter’s New Retweet Feature?

> More to Retweeting Than Meets the Eye for Businesses?