Email, Facebook and Twitter may compete with each other for their share of marketing budgets, but consumers expect brands to interact with all three channels according to a new report by ExactTarget.

“Marketers should focus on developing and implementing an integrated strategy that combines—not isolates—the powerful strengths of each of the online channels." 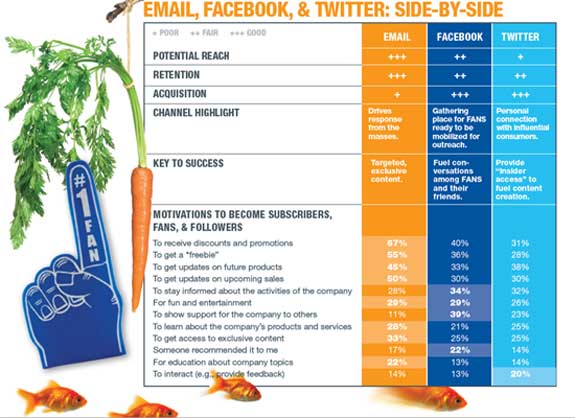 Among those who interact with brands via email, Facebook and Twitter, 27 percent of email subscribers, 17 percent of Facebook fans and 37 percent of Twitter followers are more likely to purchase from a brand after engaging with a brand via each channel.

Of those who interact with brands via email, Facebook and Twitter, 24 percent of email subscribers, 21 percent of Facebook fans and 33 percent Twitter followers are more likely to recommend a brand after interacting with the brand via each channel.

*Twitter is most likely to drive increased purchase intent; followed email and Facebook. However, given the comparatively small percentage of consumers that interact with brands on Twitter and Facebook, email remains the cornerstone online retention marketing programs.

*39 percent of Facebook users who become fans do so to publicly display their brand affiliation to friends – nearly twice as often as consumers who follow brands on Twitter (22 percent) and nearly four times more often than consumers who subscribe to email communications (11 percent) for the same reason.