Not surprisingly, the majority (85%) of online consumers prefer free content, but some categories they would be willing to consider paying for access, according to a new survey from Nielsen.

Consumers are least likely to pay for content on social networks, podcasts, consumer-generated videos and blogs. 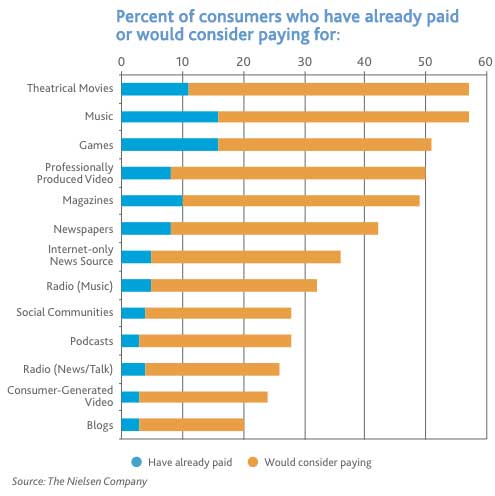 The survey found consumers worldwide generally agree that online content will have to meet certain guidelines before they spend money to access it:

*Better than three out of every four survey participants (78%) believe if they already subscribe to a newspaper, magazine, radio or television service they should be able to use its online content for free.

*At the same time, 71% of global consumers say online content of any kind will have to be considerably better than what is currently free before they will pay for it.

*Nearly eight out of every ten (79%) would no longer use a web site that charges them, presuming they can find the same information at no cost.

*As a group, they are ambivalent about whether the quality of online content would suffer if companies could not charge for it-34% think so while 30% do not; and the remaining 36% have no firm opinion.

*But they are far more united (62%) in their conviction that once they purchase content, it should be theirs to copy or share with whomever they want.

Checking Out the OtterBox Tandem Series