Consumer Demographics and Their Wireless Devices

As smartphone usage becomes more and more mainstream, businesses have to consider how their audiences are interacting with them online. For that reason, it can help to gain insight into how users of different devices interact with those devices.

AdMob released its monthly Mobile Metrics report today, which finds that Android and iPhone users download a similar number of apps every month and spend a similar amount of time using the apps. However, while Only 21% of Android users purchase at least 1 paid app per month, 50% of iPhone users do, 35% of iPod touch users, and 24% of webOS users. In other words, if you want to reach Android users through an app, you may have better luck if that app is free.

73% of Android users are male, compared to 58% of webOS users, 57% of iPhone users and 54% iPod touch users. The iPhone, iPod touch and webOS have similar gender distributions, with just over half of the users on all devices being male. 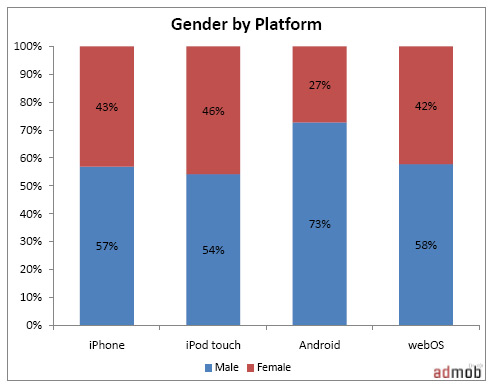 In addition, iPod touch users skew considerably younger relative to other platforms and devices, according to AdMob. Based on the company’s survey, 78% of iPod touch users are below the age of 25, compared to 25% of iPhone users and 24% of Android and webOS users.

The iPad will be out before long, and that means users will have access to apps that iPhone users and iPod Touch users do. 16% of iPhone users said they intend to purchase an iPad, compared to 11% of webOS users and only 6% of Android users. Of course, Google is working on its own new devices that would more directly compete with the iPad.

Which platform do you use? Would you recommend it? Tell us.