comScore Puts Android Up Yet Again

Palm’s out of the running.  Microsoft’s about to lose its advantage.  And although they’re still way out in front, even RIM and Apple appear to be in trouble, according to the latest report from comScore, which indicates that Android has taken market share from all of its top competitors.

You can see the data for yourself below.  Note that it’s not exactly up to date, covering the period between mid-February and mid-May, so RIM, Apple, and Microsoft fans can cling to the hope that they’ve made comebacks.  Also, RIM’s loss isn’t as bad as the dips corresponding to the other companies.

Still, it looks like Android is making a significant dent in the market. 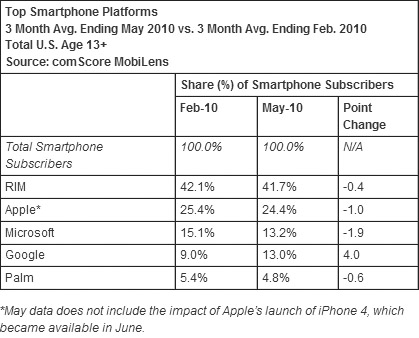 If these patterns persist, Android will have already toppled Microsoft and secured third place by now.  Then Apple will fall sometime around December.

It should be interesting to see how this plays out.  Google could spend lots of money and energy in an effort to press ahead, or Apple could do the same in the hope that the iPhone 4 will preserve its market share.  Or all of the companies could show a certain amount of patience/confidence by just maintaining their current levels of ad spending.

Google Could Have Collected WiFi Data From Members Of Congress