Facebook and Hulu, while doing fine in many respects, couldn’t quite hold online video viewers’ interest in November as they’ve done before.  New stats from comScore indicate that both companies failed to match past performances last month, with Facebook losing a spot on a top ten list and Hulu falling off it.

To delve into the numbers: Facebook saw its unique user count fall from 47.4 million individuals in October to 42.5 million in November, which caused it to drop from fifth place to sixth in terms of attracting unique video viewers. 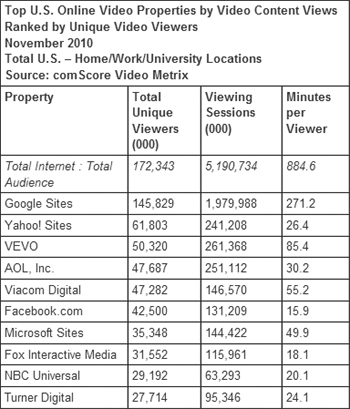 If you’re curious about some other details, the organization shared in a statement, "Yahoo! Sites captured the #2 spot with 53.8 million viewers, followed by Viacom Digital, jumping 4 positions in October with 52.9 million viewers. . . .  Google Sites had the highest number of viewing sessions, crossing the 2.0 billion mark in October, and average time spent per viewer at 272 minutes, or 4.5 hours."

As always, it should be interesting to see what kinds of turns these numbers take in the next report.