Heading into the holiday season, many economic experts seemed to fear that the average present would be a homemade scarf or coffee mug.  Instead, the latest (and probably last) comScore data concerning the holiday shopping season shows that U.S. online spending hit a record $30.8 billion.

That works out to an increase of 13 percent compared to the same period (November 2nd through December 27th) in 2009, which isn’t at all bad.  It certainly beats the rate of inflation and hints that people weren’t trying to be tightfisted.

The year-over-year increase associated with certain days was even more impressive, as well.  comScore recorded a whopping gain of 61 percent for Black Friday, for example, and there were jumps of 28 percent and 16 percent on Thanksgiving Day and Cyber Monday, respectively. 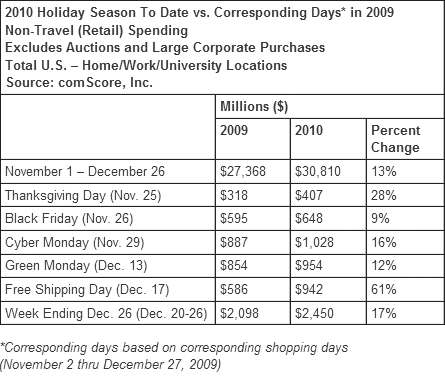 This led comScore chairman Gian Fulgoni to say in a statement, "For at least this holiday season, the American consumer has been able to shrug off the continuing economic challenges of high unemployment rates and depressed housing prices and spend at a rate that has been slightly stronger than we had expected.  After the past few years’ struggles, it is gratifying to see e-commerce return to a state that can only be described as a very merry holiday shopping season."

Let’s hope increases of this sort continue to occur as we move into 2011.