Today, new comScore statistics regarding the mobile market were released, and it looks like RIM and Apple – and Microsoft and Palm, for that matter – are in trouble.  Android was the only mobile operating system to increase its market share between May and August.

As the table below shows, comScore determined that Google’s market share rose from 13.0 percent to 19.6 percent during that period.  At the same time, Apple saw its share shrink from 24.4 percent to 24.2 percent, and if nothing changes, that means Google will be ahead (26.2 percent to 24.0 percent) by November. 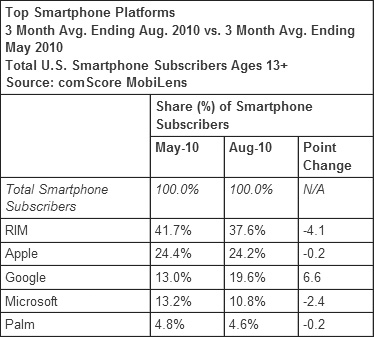 RIM’s arguably doing a little better, since it still had an impressive market share of 37.6 percent in August.  But again, if the losses and gains comScore documented continue unchecked, Google will have taken the absolute lead (32.8 percent to 29.4 percent) by February.

The one silver lining for all the non-Googles out there is this: comScore reported, "Despite losing share to Google Android, most smartphone platforms continue to gain subscribers as the smartphone market overall continues to grow."

Then there’s the slight wildcard of Windows Phone 7 to consider, although Microsoft’s performance between May and August put it in a weak starting position.

As always, we’ll be sure to see what happens and report any significant developments.

Now You Can Deposit Checks Into PayPal With Your iPhone