Although it’s perhaps not a worldwide phenomenon like Facebook, new statistics from comScore indicate that LinkedIn is at least an international success.  It turns out the network is more popular in the Netherlands and Ireland than in the U.S., and it has quite a lot of fans in other countries, as well.

One thing we should note: these popularity rankings were adjusted to account for the number of local Internet users.  So no one’s suggesting that there are more LinkedIn users in Denmark than in the entire United Kingdom.

That said, comScore’s Andrew Lipsman reported today, "The Netherlands ranked #1 among all Internet markets in terms of LinkedIn penetration . . . at 15.2%.  Interestingly, this popularity was also evident in a handful of surrounding countries in Europe including Ireland (14.7%), Denmark (12.1%), Belgium (10.0%) and the U.K. (9.4%)."

You can see the rest of the top ten list for yourself below. 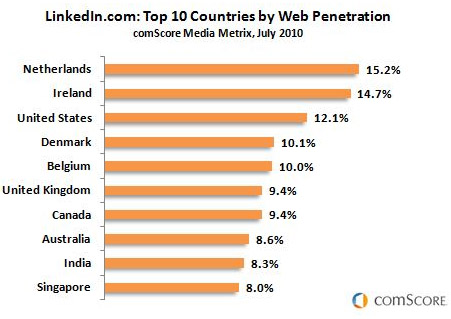 Then Lipsman continued, "The Dutch are not just the most likely to visit LinkedIn but they are also among the most highly engaged.  They rank #1 among all markets in terms of the average number of pages of content viewed (64 page views per visitor) and #2 after the U.K. in average time spent (21 minutes per visitor)."

All of these facts constitute some interesting accomplishments on LinkedIn’s part.  The network could branch out even more in the future, too, if it takes additional languages into account.

Does Google Instant Mark the End of SEO?