Well, it looks like the hot new startup is Color. Just about everyone in the tech blogosphere is talking about it. Of course that doesn’t always translate into mainstream success, but Color did secure $41 million in funding from Sequoia Capital (along with Bain Capital Ventures and Silicon Valley Bank), who has a pretty good track record to say the least.

12 hours ago via Twitter for Mac · powered by @socialditto

“Just as the iPhone changed everything about mobile phones, so Color will transform the way people communicate with each other,” said Sequoia Capital partner Doug Leone. “Once or twice a decade a company emerges from Silicon Valley that can change everything. Color is one of those companies.”

Read here for more about what Color actually does, if you don’t know about it yet. In a nutshell, it’s about social picture taking – taking pictures together, and perhaps even more importantly – archiving. Here’s a snippet from Color’s announcement:

Every photo and video captured using Color is stored on the Web for immediate access via the application without requiring massive amounts of storage space on your phone. Capture every experience without worrying about using up memory; Color has infinite capacity. Each day is beautifully displayed as a series of thumbnail images. Scroll through days, weeks, or even months, instantly using an intuitive touch interface. Tap on any image to go back to the day when it was originally captured for full contextual information, like who was involved, who saw it, and whatever conversation it sparked. Looking back has never been so detailed, easy and fun. 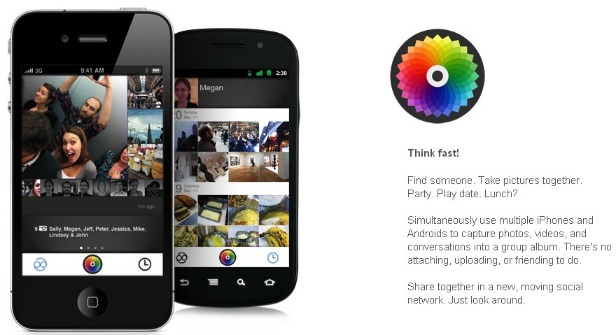 “Color is the most advanced and intuitive way to share with your iPhone and other smartphones,” says Color CEO Bill Nguyen, who also co-founded Lala, which would later be acquired by Apple. “We are happiest when we experience life together: not alone and days later online. By creating Color, we made it possible to instantly capture, experience and share life with those around you without rigid Web concepts like ‘friending.’ We believe real social interactions are dynamic and evolve with time.”

John Battelle had some interesting things to say about Color, suggesting that it might be the “execution of augmented reality that truly scales.” That’s a whole other conversation, and an interesting one at that. “In short, if Color is used by a statistically significant percentage of folks, nearly every location that matters on earth will soon be draped in an ever-growing tapestry of visual cloth, one that no doubt will also garner commentary, narrative structure, social graph meaning, and plasticity of interpretation,” Battelle wrote. “Imagine if Color – and the fundaments which allow its existence – had existed for the past 100 years. Imagine what Color might have revealed during the Kennedy assassination, or the recent uprisings in North Africa and the Middle East, or hell, the Rodney King beating?”

It is worth noting, that there are other ways to geo-tag photos, but Color could bring an interesting new dynamic to this.

Naturally, privacy concerns over such a service are already mounting. Don’t like it when people tag you in a Facebook photo, which you have no control over until after the fact? You’re probably going to love this. Color takes the Twitter-style concept of what you post is public, and applies it to photos.

The funding will be used to develop Color’s technology and expand globally, the company says. They’re already rushing with the updates (with good reason considering the amount of attention the app – which is available for both iPhone and Android currently – is receiving).

Nguyen told Ben Parr at Mashable that the next version won’t even let you use the app unless someone else is nearby, as “it’s going to make no sense” without other people using it nearby.

@color
ColorNew Update to @color for Android just got pushed into the Marketplace. Thanks for your patience! http://bit.ly/fJTIln

7 hours ago via TweetDeck · powered by @socialditto

Color is even attracting some celebrity attention, which has historically been pretty helpful in getting new services to catch on. It certainly did wonders for Twitter.

@color
ColorTotally missed @jimmyfallon using @color! http://bit.ly/eCGFmL & gave a user a ticket to the show! Awesome. Hit us up Jimmy!

11 hours ago via TweetDeck · powered by @socialditto

It’s entirely possible that Color is more hype than revolution. We’ll know in time. There’s no question, however, that some interesting ideas have developed as a result of its launch.

Do you think Color is going to be huge? Share your thoughts in the comments.