Anyone who wagered Chrome wouldn’t succeed should, regardless of the exact terms of the bet, probably go ahead and pay up.  New stats show that, in the past twelve months, Google’s Web browser has carved out a sizable market share and indeed seems to be catching up to Firefox.

StatCounter data (put into the nice graph you see below by Pingdom) indicates Chrome had a market share of 3.7 percent in September of 2009.  By September of this year, that number had grown to 11.5 percent. 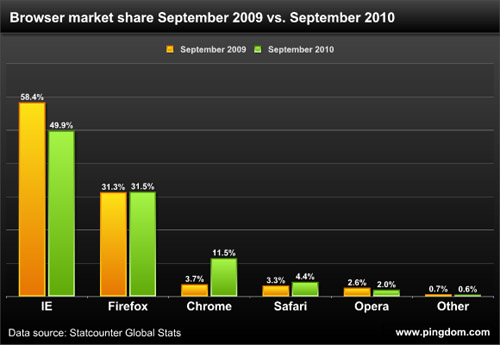 11.5 percent appears to put Chrome well past the point of being some sort of Silicon Valley phenomenon.  Note that the combined market shares of Safari, Opera, and "Other" can’t match it.

Also, Firefox, Safari, Opera, and "Other" weren’t able to achieve similar increases during the period, which means Chrome’s gain can’t be explained away as the simple result of Internet Explorer’s loss.

Of course, the bloggers at Pingdom noted, "When it comes to establishing mindshare, Google has a huge advantage over Mozilla.  They own not just one, but several of the world’s largest web properties, and they have frequently been advertising Chrome on sites like YouTube and the Google Search homepage (Google.com)."

Still, Chrome’s growth is impressive.  The folks at Mozilla may want to look out.