Chrome Address Bar Could Be Eliminated in Future Release

Would you use a web browser that didn’t have an address bar? A report from ConceivablyTech.com points out that Google is working on new user interface layouts for Chrome, and one of these would eliminate the address bar.

The publication’s Wolfgang Gruener quotes Google’s Jeff Chang as telling developers, "There are a number of UI / frontend efforts under way." Gruener reports:

Google is working toward an improved Chrome UI that could be even more radical and eliminate the URL bar altogether. According to the Chrome UI variants page, Google is currently thinking about four different layouts – with four different types of navigation: The classic navigation version, compact navigation, sidetab navigation as well as a touchscreen version. Google said that it is "interested" in developing all four versions, but current builds of Chrome “are focused on classic and compact navigation styles."

The most dramatic modification is something Google calls a "compact navigation" model. The idea is to eliminate the two line navigation layout which currently has tabs on top and the navigation buttons, menu and URL bar below. The compact navigation model would only have one line and place the navigation buttons, a search button, tabs and menus next to each other. The URL bar is gone and the URL of each tab is not visible at all times, but only displayed when a page is loading and when a tab is selected. In effect, there are now multiple URL bars that are integrated into tabs.

The idea for the compact design is apparently all about saving screen real estate for web content, something that Google has already prided itself on with Chrome thus far. There is another interesting element to this, however. Google says, "If we take the address bar out of the tab, it can be used as both a launcher and switcher; the user doesn’t have to worry about replacing their active tab. The current url shows while a site is loading, and can be edited or changed by clicking on the tab." 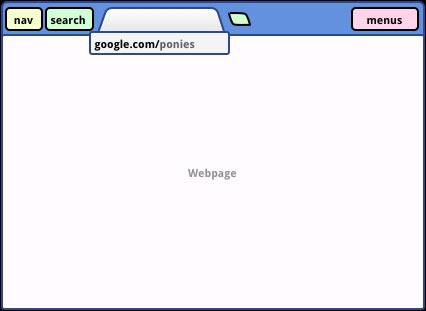 Strengths of this design, according to Google are:

– Search can be used as launcher and switcher

– Flexible for larger screens. Users can quickly toggle between this and classic navigation

Weaknesses, according to Google, are:

– Current URL is not always visible

– Navigation controls and menus are not located within the tab and

A lot of people are already using search as a navigational tool, so it’s not that far-fetched. With the current Chrome omnibox especially, it’s almost easier to must enter a query rather than a URL sometimes. The recent addition of Google Instant to the omnibox facilitates this even more.

We reached out to Google for comment, but the company’s offices are closed for Washington’s birthday. We’ll update if we receive a response.

WebProNewsWould you use a web browser without an address bar?2 hours ago Like 19 comments