I CAN HAZ MOAR INTERNETS?

Okay, that was fun.  But if you think there is no money to be found in aggregating all that is trending on the internet, you would be wrong.  Today, knowyourmeme.com was acquired by Cheezburger Network for a seven figure sum, according to tubefilter news.

Cheezburger Network owns a multitude of popular meme sites, including its flagship icanhascheezburger.com which is colloquially referred to as LOLcats.  It features felines in precarious situations, with overlaying text commentary made by people who use a template provided by the site.  Almost all of the content on the Cheezburger sites are user-submitted.  In 2008 Cheezburger Network acquired Failblog.org, everyone’s favorite place for pictures and video of all the failures happening around the world.  The network has since expanded to include sites like Failbook (fails on Facebook), Engrish (funny misspellings of English words, usually in Asian countries) and Go Cry Emo Kid (pretty self explanatory). 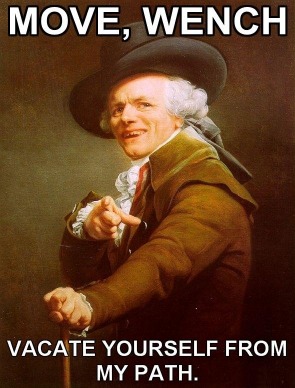 At SXSW, we talked to Ben Huh, founder and CEO of the Cheezburger Network.  He explained that he had recently raised $30 million in venture capital, showing the rising popularity of the meme business.

Warning: things are about to get meta.  Mega-meta.

In acquiring knowyourmeme.com, the Cheezburger Network is the owner of the largest source for knowledge about memes on the internet.  The meme now owns the database for which it is included as a meme.  Whoa.  Before this acquisition, they had their own meme aggregation site, memebase, but it is not nearly as extensive a collection as is knowyourmeme.com.  Know Your Meme has thousands of entries, most including wikipedia-like descriptions and details on exact origins and popularity charts.  Many even have videos chronicling the rise of the meme.  Below is a explanation of the “Tenso” meme.  It is barely NSFW.

Memes are sometimes born out of trends.  Rebecca Black, whose quick rise to internet stardom captivated a nation, was a trend and is now a meme.  Hundreds of parody videos can attest to that.  My point, as convoluted as it might sound, is that internet memes are marketable.  There is money to be made on ANYTHING that catches fire on the web.  Well, maybe not anything and everything, but quite a lot of it.  If you take a moment to comb through Know Your Meme, you’ll see what I mean.