People Who “Check-in” Are Young, Most Likely Android or iPhone Owners

A study put out today by comScore sheds some light on who is doing the majority of the “checking-in” in the U.S.

The statistics were derived from the 16.7 million mobile users than use location-based services and check-in with Facebook Places, Foursquare and Gowalla among others.  That’s 7.1% of the entire mobile population.  Out of those 16.7 million that check-in, 12.7 million of them did it on a smartphone.

The majority of check-in service users are employed full-time (46.6%) or a full-time student (23.3%).  Also, check-ins are most frequently taking place on Android and iOS phones.  36.6% of check-in service users do so on Android and 33.7% do so on an iPhone.  When the amount of the total smartphone population each OS represents is taken into account, however, Apple has the higher check-in participation per user. 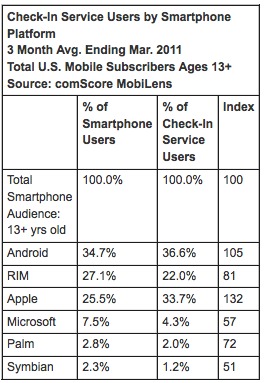 “Although still in their relative infancy, location-based mobile check-in services are seeing rather impressive adoption among smartphone users,” said Mark Donovan, comScore senior vice president of mobile. “The ability to interact with consumers on this micro-local level through special offers, deals and other incentives provides brands with the real-time opportunity to engage consumers through their mobile device.”

In other check-in news, Beyond recently put out this infographic that shows how social location apps are used by those who have adopted them, why non-users would consider trying them and what people are talking about on the web in terms of location apps.

Google Chromebooks: How Will They Impact the Antivirus Industry?

May 12, 2011
Recent Posts
Registration is disabled.