Twitter phenomenon, fired television actor and tiger blood carrier Charlie Sheen may be using his recently acquired super-celebrity for a good cause.

Last night he tweeted that he was on his way to Alabama on a “recon mission.”

@charliesheen
Charlie SheenAlabama; Heading your way. On a recon mission. My Cadre right behind me. You need help. I’m bringing it. DogSpeed. c

19 hours ago via Twitter for iPhone · powered by @socialditto

As you probably know, Alabama was hit particularly hard by a strong storm system that moved its way through the southeast last week. Videos of the massive tornadoes became viral sensations as they depict the absolutely terrifying extent of the damage mother nature can inflict. The tornadoes killed hundreds of people and left a trail of devastation unlike many other storms to ever hit the U.S. Here’s one such video of a giant tornado ripping through trees in Tuscaloosa:

A few hours ago Sheen tweeted that he had arrived in Tuscaloosa, and that more is forthcoming on how to help the cause.

@charliesheen
Charlie SheenI’m in Tuscaloosa. it’s beyond words. Info coming soon on how you can all help. c http://t.co/yKlNSCQ

4 hours ago via Twitter for iPhone · powered by @socialditto

He tweeted this pic of the devastation: 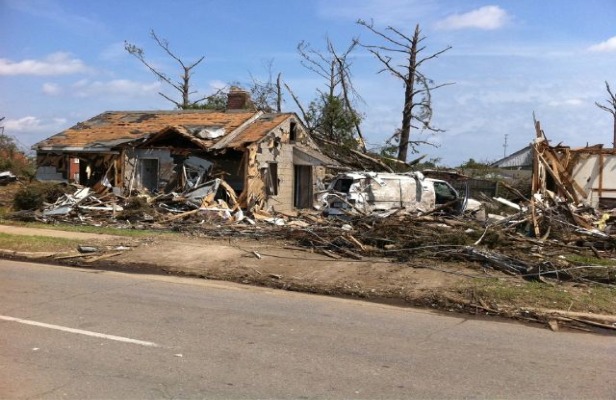 The New York Post confirms that the actor is indeed in Alabama and is pledging to help raise money for the recovery efforts. Today he has already met with aid center volunteers, Tuscaloosa Mayor Walt Maddox and FEMA workers. Sheen said that he was hopeful that he could do something to “provide some compassion,” as quoted in the Post.

Charlie Sheen became a sort of national pop culture phenomenon shortly after he was fired from his hit CBS show Two and a Half Men. He was fired amidst drug and alcohol problems for which he eventually entered rehab. After a string of bizarre interviews and videos where he coined some catchphrases like “winning” and “tiger blood,” he launched on Twitter and was soon the Guinness World Record holder for fastest to reach 1 million followers.

He also threw in his two cents about Osama Bin Laden’s death, joining the ranks of celebrities who tweeted about the breaking news.

8 hours ago via Twitter for iPhone · powered by @socialditto

If he can use his amazing Twitter popularity, whether unwarranted or not, to raise money for devastated communities in the south, he might actually be able to legitimately call himself an “unemployed winner.”

Google Facing More Competition-Related Scrutiny, This Time from the FTC

May 2, 2011
Recent Posts
Registration is disabled.