The cofounder, president, and CEO of Nvidia is confident that Android will take over the tablet PC market.  At Computex Tapei, Jen-Hsun Huang lavished praise on the operating system, indicating that competitors just can’t keep up. 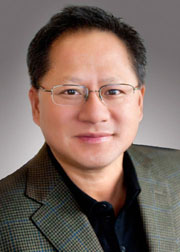 As reported by Sumner Lemon, Huang explained, "Windows is too big and it’s too full featured for smartbooks and tablets."  He also said, "Android has become the fastest growing mobile operating system in the world and, in fact, it has surpassed the iPhone in terms of growth and in terms of users."

Huang then described Android as "an operating system to unite behind," adding, "Andy Rubin and his team [at Google] know exactly where the industry needs to go.  Android started out as a phone but it’s not lost on them that the tablet is going to be very important and that the Android operating system has to evolve, and be enhanced in certain capabilities, in order to be a good tablet operating system."

Count on seeing more than a few tablets packing both Nvidia components and an operating system developed by Google, then.

Count on seeing them rather soon, too, since Huang mentioned this fall as a rough target for having everything mesh.