"Whenever I hear SMB, I think of Super Mario Bros," Foursquare co-Founder and CEO Dennis Crowley said today. But in all seriousness, he has tremendous pride in his service and its future use for local businesses (among other things).

Speaking here at ad:tech New York, he compared Foursquare to a Google Analytics for people who walk in your door. "These are your best customers," he said. "The check-in is kind of a commodity."

"The check-in is ultimately boring," said Crowley, adding that Foursquare is focused on what comes after the check-in. The company wants to deliver more relevant  content based on check-ins, beyond just games. "Every check-in should mean something," he said, though games are still a big part of what Foursquare is about. "The  whole thing is based on Super Mario Bros." he joked. 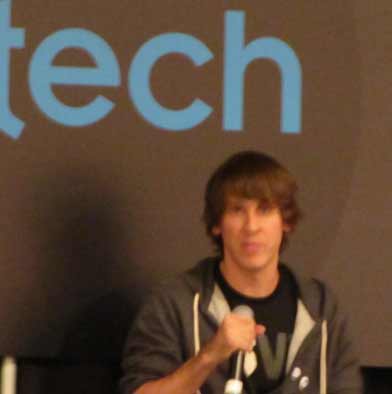 But he talked about scenarios such as traveling to Chicago and getting some tips on things to do based on where you’re at and your past experiences in another city like New York. Real, practical uses. He says he’s "really bullish" on the local merchant-related stuff Foursquare is doing.

"The harder part is consumer brands…consumer packaged goods," he said. For example, things like Foursquare to help sell batteries or cereal. "We’re definitely still in that experimental stage."

Foursquare is not without its skeptics of course. Neither was Twitter when it started, he reminds us. "We’ll be kicking ass a year from now," he says.

There are plenty of people that still think Twitter is useless, and there will probably always be those opinions about Foursquare as well, but Crowley is confident that once they are able to start showing real metrics and data about why this can be useful, more and more people will start to get it. "I think we’re still in the super early days of this."

Do you get Foursquare? Tell us what you think.