The U.S. Census Bureau said today it has launched a new online mapping tool detailing how well communities responded to the 2000 Census in an effort to raise awareness for the upcoming 2010 Census.

Visitors to the new Google-based map will be able to find the 2000 Census mail participation rates for states, counties and cities, as well as smaller areas called "census tracts." After the 2010 Census forms are mailed out in mid-March, the online map will be updated to include a tracking tool with daily updates of the 2010 Census mail participation rates. Users will be able to compare their 2010 Census progress using their 2000 Census rates as a comparison. 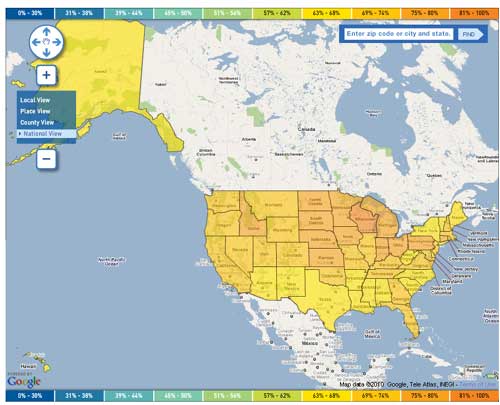 "The future of your community starts with a look at its past," said Census Bureau Director Robert M. Groves.

"The 2000 Census map allows communities to see which areas need extra attention and reminders to improve mail participation. We will be challenging communities nationwide to take 10 minutes to fill out and mail back their 2010 Census forms next month."

The Census Bureau says for every 1 percent increase in mail response, taxpayers will save an estimated $85 million in federal funds. Those funds would other wise be used to send census workers to collect census response in person from households that don’t mail back the form.

As required by the U.S. Constitution, the once-a-decade census must count every person living in the United States. The data also help determine how more than $400 billion in federal funds are distributed to state local and tribal governments every year. That includes money that could go toward roads, hospitals, schools and social services.

Consumer Demographics and Their Wireless Devices