Additionally, both the standard and high-quality MMOD video player will provide viewers with the ability to show stat overlays on top of live video action, displaying tournament and game leaders in categories including points, assists, rebounds, and 3-pointers.

MMOD’s standard video player will launch on March 10 with historical highlights from past NCAA tournaments at NCAA.com as well as via links on CBSSports.com. 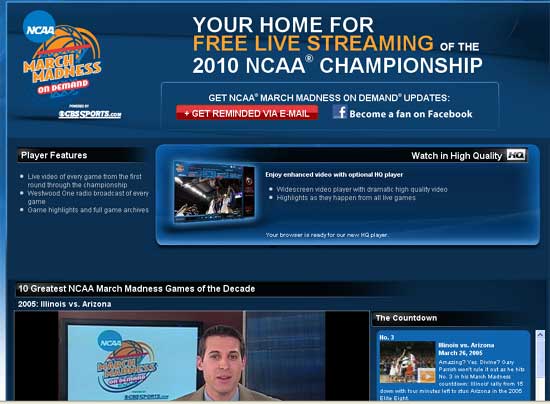 The MMOD "Boss Button" has been redesigned for 2010 as well. The "Boss Button", which was clicked over 2.7 million times during the 2009 tournament, hides the live video action on the screen and silences the audio, replacing it with a "business-like" image. The new "Boss Button" image will be introduced on March 14 before the NCAA Basketball Champion Selection Show.

"The upgrades and improvements CBSSports.com has made to NCAA Madness on Demand in 2010 will provide for an incredible online viewing experience," said Jason Kint, Senior Vice President and General Manager, CBSSports.com. "

Our goal has always been to give NCAA basketball fans access to all the games on all platforms – TV, online, and mobile, and through that process, we’ve built one of the largest streaming events in the world."