For better or for worse, it looks like Carl Icahn has cut some ties to Yahoo.  The activist investor, who once bought a great many shares as part of an effort to force out Jerry Yang and Yahoo’s board of directors, reduced his stake by about 80.2 percent during the last six months.

Obviously, then, Icahn doesn’t intend to go on the attack against Carol Bartz and the current board, which might be good news for Yahoo.  Optimists could interpret Icahn’s move as a sign of contentment.  (Or perhaps he managed to reap some profits at one point.)

Icahn’s move might be a sign of surrender, however.  As the graph below shows, Yahoo’s stock was at nearly the same level on Friday as it was six months ago. 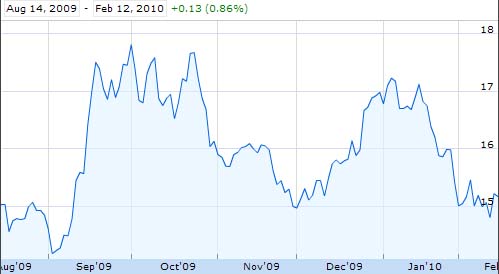 Anyway, perhaps as a result of this development, Yahoo’s stock is down a bit this morning.  Neither Icahn nor Yahoo has issued a statement on the matter.