Can You Put a Dollar Amount on a Facebook Fan?

Facebook is bigger than anyone ever imagined it would be, and it’s not done growing. Businesses are finding more ways to use it to their benefit, and more people seem to be willing to get involved with brands on the social network.

What value would you place on a Facebook fan? Let us know.

Businesses are getting traffic from Facebook, but they’re also forming relationships, and direct lines into the news feeds of those who are perhaps most likely to spend money with them.

A study from Syncapse and hotspex (via Matthew Ingram) indicates that the average annualized value of an individual Facebook fan is $136.38. Explaining its methodology, Syncapse explains, "Syncapse has adopted a unique approach to understanding the financial returns that social members on Facebook provide to a business. Facebook fan ROI can be understood though a knowledge of key performance indicators that have traditionally led to increased sales and profit in business and the key differences between Facebook users who have opted to ‘fan’ a brand and those who have not."

You can read the report (pdf) to get all the specifics, but the study looks at product spending, brand loyalty, propensity to recommend, brand affinity, and earned media value. Some other key findings from the report include:

– On average, fans spend an additional $71.84 on products for which they are fans compared to those who are not fans.

– Fans are 28% more likely than non-fans to continue using the brand.

– Fans are 41% more likely than non-fans to recommend a fanned product to their friends.

Obviously, as this is just a study of a percentage of Facebook users and brands, you can’t take this information as gospel, but the findings are interesting nevertheless, as ROI remains a chief concern among businesses trying to justify a budget for social media. 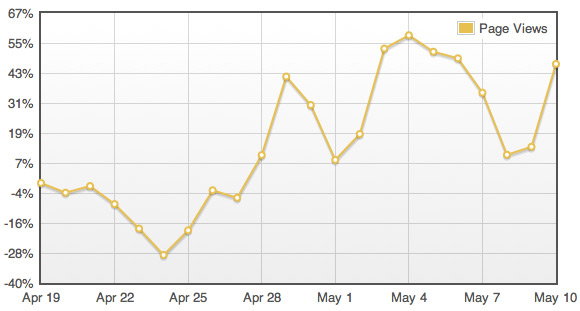 I would imagine that the more cases we look at in which sites add Facebooks’s Like button or other social plugins, the more stories we’ll see of increased traffic.

Facebook already has the masses and that growth will continue as more sites realize the added value of the social plugins. As we’ve already seen, privacy concerns have done little to deter growth.

Curt Hopkins at ReadWriteWeb looks at some interesting numbers from Vincenzo Cosenza, showing Facebook’s growth in different countries. Facebook is listed as the leading social network in 111 of 131 countries surveyed.

The point is, the more people there are using Facebook, the more traffic brand can potentially get. The more that a site integrates itself with Facebook, the better chance it has of capitalizing on that.

MTV Looks for its First "TJ" or "Twitter Jockey"