The governments of France, Germany, and Italy are all arguably annoyed with Google.  China’s not thrilled with the search giant, either.  And now, because of the way in which Google’s portrayed a disputed border, Cambodia’s quite mad at it.

According to Reuters, Svay Sitha, the secretary of state of Cambodia’s Council of Ministers, wrote a letter to Google complaining about its interpretation of the area where Cambodia and Thailand touch.

"(The map) is devoid of truth and reality, and professionally irresponsible, if not pretentious," Sitha said.  "We therefore request that you withdraw the already disseminated, very wrong and not internationally recognised map and replace it. 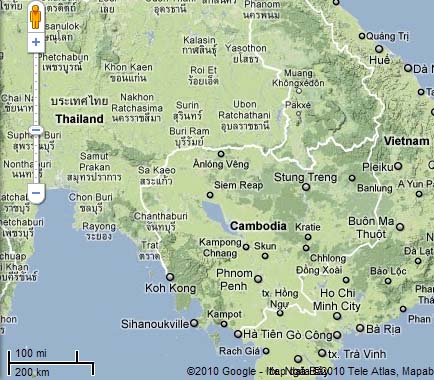 Google probably won’t just swap in Cambodia’s favorite map and call it a day, of course; that would upset Thailand.  This isn’t the first time Google’s been caught up in a border dispute, though (China and India have involved it before, and so have India and Pakistan), meaning it’s possible to guess how this will play out.

The odds essentially favor Google coming up with three maps.  One will be for users in Cambodia, another will be for users in Thailand, and the last will be for everyone else.  The first two will show borders favoring their respective countries, while the third will use dotted lines to illustrate the dispute.