I’m not sure there’s a “holiday” that gets more Internet love than April Fool’s Day. Sure, the Halloween, Thanksgiving, and Christmas holidays are well represented on net, in the way of site designs and the like, but they don’t get the kind of effort these sites and other tech-related companies give to the 1st day in April.

Take Google’s commitment to April Fool’s. Every year, they “debut” an impossible web-based service — carrier pigeons, Google on the moon — complete with detailed descriptions of their levity. This year, Google continued the trend by introducing GMail Motion, a silly idea that jokingly uses an elaborate number of body movements to execute commands. While such a thing does not exist, that doesn’t stop Google from going all out in their presentation.

And Google is just one of many “techie” sites to get in the April Fool’s Day spirit.

Over at TechCrunch, they have a comprehensive rundown of the different pranks. There’s one, however, that escaped their round-up post: Bryn Mawr College’s entry into the cyberspace celebration of April 1st. In case you aren’t aware, Bryn Mawr is a women’s college located in near Philadelphia, and it’s one of the schools that make up the Seven Sisters.

While their initial prank — the announcement of the school’s partnership with an alien race, complete with promotional pictures of the momentous agreement — was silly enough, it’s the lead image on school site’s index page, one that makes effective use of the Star Wars motif, complete with Princess Leia’s honey bun hairdo, that takes their prank from “heh” status to a “that’s pretty awesome” level: 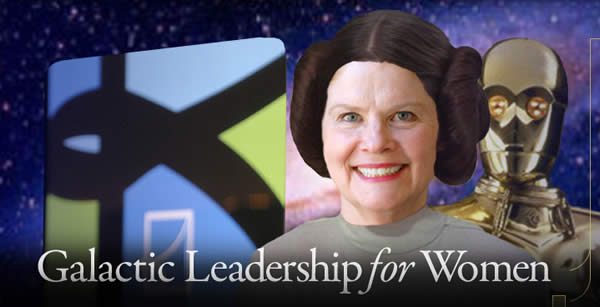 As for the alien partnership that began their prank, school president Jane McAuliffe “official stance” on the agreement only made the idea better:

Global partnerships are so 2010. Bryn Mawr is simply beyond global, and we are boldly going where no college has gone before. Our students need to learn to be intergalactic citizens.

Considering the failure that is Mars Needs Moms, maybe next time, the script doctors for Disney will look Bryn Mawr’s way before they try to produce a script dealing with females in sci-fi settings.