Broadband penetration in rural markets in U.S. has experienced double-digit growth in the past year, driven largely by regional providers continuing to increase their market share in these areas, according to a new report by comScore.

"Although rural markets have witnessed significant increases in broadband penetration during the past few years, these areas still lag behind the penetration rates of metropolitan areas. As the primary drivers of rural broadband growth, regional ISPs have the opportunity to increase their market share by delivering broadband to the millions of households still relying on dial-up services." 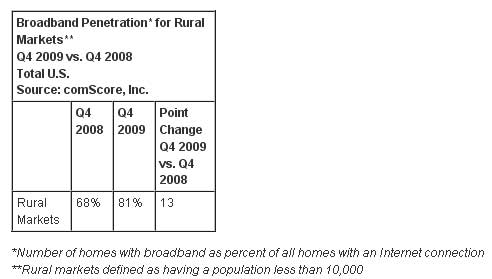 Regional ISPs ranked among the fastest-growing providers across several rural U.S. markets. In Maine, TDS Telecom experienced a 101 percent increase in the number of broadband households, while in Arkansas Windstream Communications recorded a 57 percent gain. Frontier Communications led as the fastest-growing ISP in Nebraska (up 28 percent), Idaho (up 27 percent) and Alabama (up 26 percent). 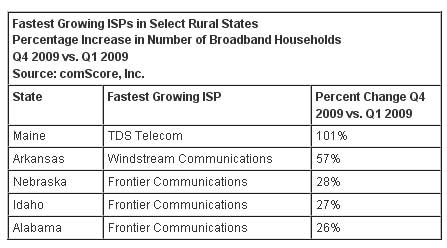 "Often major ISPs need to focus their strategic operations in their largest and most profitable markets, which gives smaller regional providers the opportunity to establish strongholds in more rural areas while playing a key role in national broadband expansion," said Jurutka.