Broadband Adoption In The U.S. Slows

The adoption of broadband Internet access slowed significantly over the last year, according to a new report by the Pew Internet & American Life Project.

Two-thirds of Americans (66%) now have a broadband connection at home, a number that is little changed from the 63 percent with a high-speed home connection at a similar point in 2009. 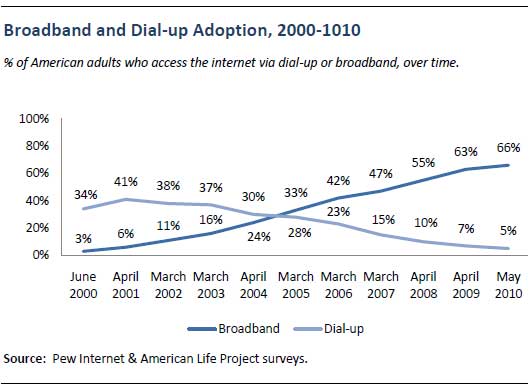 By a 53%-41% margin, Americans say they do not believe that the spread of affordable broadband should be a major government priority.

Asked in a national phone survey by Pew if expanding affordable high-speed Internet access to everyone in the country should be a top priority for the federal government, important but a lower priority, not too important, or should it no be done, a majority of Americans chose the latter two options:

*27% said it was "not too important" a priority

*30% said it was an important priority

*11% said it should be a top priority

While younger users (those under age 30) and African-Americans are the most likely to favor expanded government efforts, those who are not currently online are especially resistant to government involvement in broadband promotion. Fully 45% of non-users say government should not attempt to make affordable broadband available to everyone, while just 5% of those who don’t use the Internet say broadband access should be a top federal government priority.

"As broadband technologies have been adopted in the majority of American homes, a debate has arisen about the role of government in stepping in to ensure availability to high-speed internet access for all Americans," said Senior Research Specialist Aaron Smith, author of the Pew Internet Project’s new report.

"The majority think not, and the surprise is that non-users are the least inclined to think government has a role in the spread of broadband. It could be that the recession is causing Americans to prioritize other issues, or it could be general anti-government wariness. It could also stem from the fact that not many non-users are anxious to see government promoting technologies that they view as difficult to use and offering uncertain benefits"

Will a Redesign Provide MySpace With a Fresh Spark?