People who are Facebook fans and Twitter followers of a brand are more likely to buy the brand’s product or recommend it to a friend, according to a new study by Chadwick Martin Bailey and iModerate Research Technologies.

The study of 1,500 consumers found that 60 percent of Facebook fans and 79 percent of Twitter followers are more likely to recommend those brands since becoming a fan or follower. 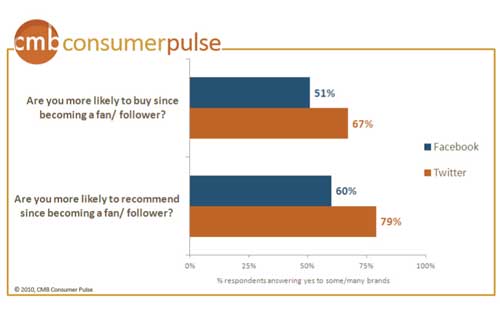 "While social media is not the silver bullet that some pundits claim it to be, it is an extremely important and relatively low cost touch point that has a direct impact on sales and positive word of mouth," said Josh Mendelsohn a vice president at Chadwick Martin Bailey.

"Companies not actively engaging are missing a huge opportunity and are saying something to consumers – intentionally or unintentionally- about how willing they are to engage on consumers’ terms."

The study also found that people view brands not engaging in social media as out of touch.

When asked the question "What does it say about a brand if they are not involved with sites like Facebook or Twitter?" they said the following:

* "It’s EXPECTED that a company have some digital face – whether it’s on FB or Twitter I don’t know – but they need a strong electronic presence or you doubt their relevance in today’s marketplace." Female 50-54

* "Either they are not interested in the demographic that frequents Facebook and Twitter or they are unaware of the opportunity to get more exposure in a more interactive method." Male 35-39

* "It shows they are not really with it or in tune with the new ways to communicate with customers." Female 18-24.

* "If they’re not on Facebook or Twitter, then they aren’t in touch with the "electronic" people."  Female 55-59