Borders has launched its own branded eBook store, powered by eReading service Kobo.

The company says its goal is to capture 17 percent of the eBook market by July of 2011. Borders’ eBook store launches with more than 1.5 million titles, available in a number of formats, including ePub, mobile and PDF.

"The race to emerge as a retail leader within the digital category is just starting," said Mike Edwards, Chief Executive Officer for Borders, Inc. 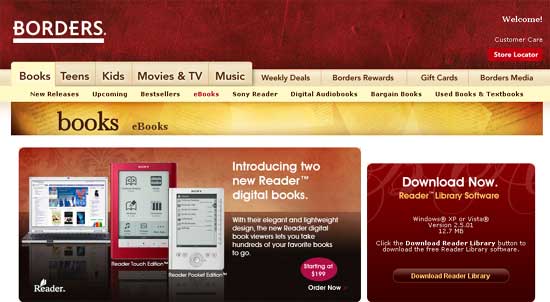 "During the past several months, we’ve been carefully crafting a digital strategy, one that has great content and a device-neutral philosophy backed by the Borders brand as its cornerstones. We believe we are very well positioned to come out strong and to ultimately claim about a 17 percent eBook market share by this time next year."

Borders has also launched eReading applications for BlackBerry and Android, also powered by Kobo. The company says anyone who downloads the free apps from July 9-11 will receive 5 free bestselling books. The titles include "Frankenstein" by Dean Koontz, "One Shot" by Lee Child, "The Alchemyst" by Michael Scott, Julia Child’s "Kitchen Wisdom" and "Master your Metabolism" by Jillian Michaels.

Borders entry into the eBook market is somewhat late as rival Amazon launched its eBook store and Kindle eReader in 2007 and Barnes & Noble along with Sony introduced their own stores and devices in 2009. Unlike its rivals, Borders did not get into the eReader device making game, allowing the company to keep its focus on being a bookseller and avoiding the recent price wars between Amazon and Barnes & Noble.