The designs of Star Wars’ well-known characters of Darth Vader, R2-D2, C-3PO and Chewbacca were created by the brilliant mind of talented designer Ralph McQuarrie, who died today at the age of 82 years old.

Ralph McQuarrie, an Indiana native and California-based designer, was commissioned by George Lucas to create scenes for his upcoming Star Wars movies, including the characters mentioned above. McQuarrie was then slated to become the conceptual designer for the whole Star Wars trilogy. McQuarrie also played a minor role as General Pharl McQuarrie in the ice-planet Hoth scenes of Star Wars’ Empire Strikes Back. 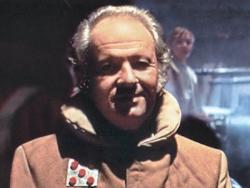 In a statement about McQuarrie, George Lucas exclaimed the following remarks:

“Ralph McQuarrie was the first person to help me envision Star Wars. His genial contribution, in the form of unequaled production paintings, propelled and inspired all of the cast and crew of the original Star Wars trilogy. When words could not convey my ideas, I could always point to one of Ralph’s fabulous illustrations and say, ‘Do it like this.'” (Source: EOnline)

McQuarrie’s outstanding talent can also be seen in various other Hollywood blockbuster movies, such as: Indiana Jones: Raiders of the Lost Ark, Close Encounters of the Third Kind, E.T.: The Extra-Terrestrial, and the original TV series of Battlestar Galactica.

The Twitter community has been active saying their goodbyes to McQuarrie, and I have provided some sentimental tweets pertaining to McQuarrie’s passing below.

@KenPlume
Ken PlumeRIP Ralph McQuarrie. Your designs of a future long, long ago and far, far away remain near and dear to the hearts of generations.

1 day ago via Seesmic ·  Reply ·  Retweet ·  Favorite · powered by @socialditto

@LifeAsWillSmith
Will SmithRIP Ralph McQuarrie, the visionary behind Star Wars. Retweet for respect.

@DeathStarPR
Death Star PRRIP Ralph McQuarrie, the visionary who designed the original #StarWars films. Your work will live on. The Force will be with you always.

@ruckawriter
Greg RuckaRalph McQuarrie passed away. His contributions to our collective imaginations can’t be measured. We have all been influenced by his vision.

1 day ago via Echofon ·  Reply ·  Retweet ·  Favorite · powered by @socialditto

@Mathew_Song
Mathew SongRIP Ralph McQuarrie… Star wars wouldn’t have been anything without your beautiful production artwork.

@fillionfan4000
Samantha R.I.P Ralph McQuarrie. You were a brilliant man, and will be dearly missed.

43 minutes ago via web ·  Reply ·  Retweet ·  Favorite · powered by @socialditto

What concept of Ralph McQuarrie’s touched you the most? Please leave your comments below.

iPad 3 Gets Its First Close Up